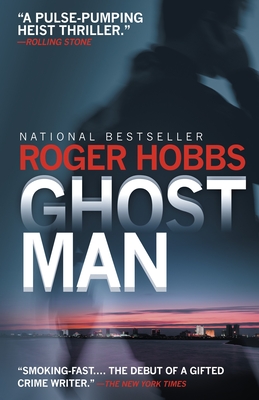 This is book number 1 in the Jack White Novels series.

“Jack, both brilliant and cunning, has made it to the top of the gangster ranks. Extremely wealthy, equipped with the most modern technological tools and constantly changing addresses and even his physical appearance, Jack is like a living ghost. Only a happy few know how to contact him. An old partner in crime to whom he is indebted calls on Jack to clean up the mess from a seemingly well-organized heist gone bad. Not trusting his former partner, hunted by an extremely dangerous mobster, and chased by the FBI, Jack needs all of his tricks to keep his ghost-like existence intact. Smart and captivating from beginning to end, a stellar debut!”
— Jean-Paul Adriaansen, Water Street Books, Exeter, NH

In a daring operation, two crooks-for-hire rob an Atlantic City casino. But their heist goes horribly wrong, and only one of them makes it out alive. Now he's on the run with half a million dollars vacuum-packed into a bundle the size of a briefcase. Little does he know it's rigged with explosives.

Almost immediately, an expert fixer named Jack is in cross-country pursuit. With less than foty-eight hours to recover the money, clean up the mess, and—for god's sake—try not to botch the job like he did last time....

Roger Hobbs was the youngest-ever winner of the CWA Ian Fleming Steel Dagger Award and is a recipient of the Strand Critics Award for Best First Novel and the Maltese Falcon Prize. Born in 1988, Hobbs graduated from Reed College in Portland. Mr. Hobbs died in 2016.

A Booklist Best Mystery of the Year

Winner of The Strand Critics' Award

“Smoking-fast. . . . The debut of a gifted crime writer.” —The New York Times

“Fast, hard and knowing: this is an amazing debut full of intrigue, tradecraft and suspense.  Read it immediately!” —Lee Child

“A stunningly accomplished debut. . . . [Hobbs] has the talent to fuel bestsellers and summer blockbusters for years to come.” —The Richmond Times-Dispatch

“A first-time novelist who’s . . . already writing with the poise of an old pro. . . . Hobbs is an assured stylist who favors clean, precise prose, [and] handles violence with a lyric touch.” —The New York Times Book Review

“Ghostman is terrific: lightning-quick, absolutely compelling, and smart as all get-out.”—The Seattle Times

“A gripping adrenaline rush, a dirty bomb of a crime thriller with a deceptive plot that confounds and stimulates characters and readers alike.” —Portland Monthly

“Hobbs is up there with the best. I don't think I've read a better botched heist than the one that begins Ghostman. It's a masterpiece of hyper-kinetic blocking and deep, vivid detail.”—John O’Connell, The Guardian (London)

“A propulsive thriller that combines incredible detail and unstoppable narrative drive. . . . Hobbs possesses a [Lee] Child-like ability for first unleashing and then shrewdly directing a tornado of a plot, but he also evokes Elmore Leonard in the subtle interplay of his characters. A triumph on every level.” —Booklist (starred review)

“This watertight debut [is] at once slick and gritty. . .  Straight out of the gate, Hobbs has mastered the essentials of a contemporary thriller: a noir-like tone, no-nonsense prose and a hero with just enough personality to ensure he doesn’t come off as an amoral death machine [as well as] heart-stopping scenes that illustrate how small mistakes can turn catastrophic.”  —Kirkus Reviews (starred review)