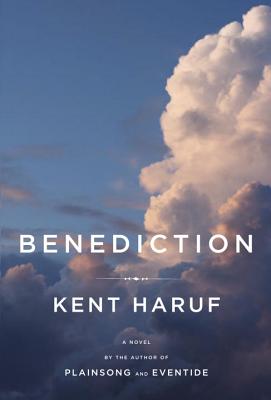 "I don’t often beg, but please, please, read Benediction. Everyone
should know Kent Haruf. The emotional power he packs into deceptively
simple sentences left me crying into cocktail napkins on a crowded
airplane as I tore through the end of this wonderful novel. Regret, loss, mortality, love; this book covers it all in
chapters that move between characters, read like vignettes and come
together in one smooth, beautiful song. It is a testament to his talent
that he can begin the story with the inevitability of Dad Lewis’s
terminal cancer and still have me mourning (in public, no less) as the
illness progresses and he holds out hope that his estranged son will
materialize. His wife, his daughter, Dad’s neighbors all came to feel
like personal friends. This is one of the best novels I’ve read in a
long time, crafted by a master of the form. This is how great literature
is done, folks, beautiful sentences laid down one at a time, steady and
even, brilliant and gorgeous, building a story right inside your heart.
Everyone should read this book. I want to read it again."

“Any new novel by Haruf is cause for celebration, but for those of us who have been waiting patiently to reconnect with the Front Range of Colorado and its quirky inhabitants since reading Plainsong and Eventide, Benediction is the answer to our literary prayers. The main character is dying, but that doesn't set a tone of great remorse or regret for a life in its last stages on Earth. Instead, it becomes a reflection of a family, of the place where they live, of the forces that formed them and made them into the strange, angry, resourceful, and engaging people who they have become. Haruf is a wonderful writer, and I can't wait to celebrate the publication of this book with him and with our customers.”
— Gayle Shanks, Changing Hands Bookstore, Tempe, AZ

A Shelf Awareness Best Book of the Year
From the beloved and best-selling author of "Plainsong "and "Eventide" comes a story of life and death, and the ties that bind, once again set out on the High Plains in Holt, Colorado.
When Dad Lewis is diagnosed with terminal cancer, he and his wife, Mary, must work together to make his final days as comfortable as possible. Their daughter, Lorraine, hastens back from Denver to help look after him; her devotion softens the bitter absence of their estranged son, Frank, but this cannot be willed away and remains a palpable presence for all three of them. Next door, a young girl named Alice moves in with her grandmother and contends with the painful memories that Dad's condition stirs up of her own mother's death. Meanwhile, the town's newly arrived preacher attempts to mend his strained relationships with his wife and teenaged son, a task that proves all the more challenging when he faces the disdain of his congregation after offering more than they are accustomed to getting on a Sunday morning. And throughout, an elderly widow and her middle-aged daughter do everything they can to ease the pain of their friends and neighbors.
Despite the travails that each of these families faces, together they form bonds strong enough to carry them through the most difficult of times. Bracing, sad and deeply illuminating, "Benediction "captures the fullness of life by representing every stage of it, including its extinction, as well as the hopes and dreams that sustain us along the way. Here Kent Haruf gives us his most indelible portrait yet of this small town and reveals, with grace and insight, the compassion, the suffering and, above all, the humanity of its inhabitants.

Kent Haruf s honors include a Whiting Foundation Writers Award, the Mountains & Plains Booksellers Award, the Wallace Stegner Award, and a special citation from the PEN/Hemingway Foundation; he has also been a finalist for the National Book Award, the Los Angeles Times Book Prize, and the New Yorker Book Award. He lives with his wife, Cathy, in their native Colorado."

“His finest-tuned tale yet. . . . There is a deep, satisfying music to this book, as Haruf weaves between such a large cast of characters in so small a space. . . . Strangely, wonderfully, the moment of a man's passing can be a blessing in the way it brings people together. Benediction recreates this powerful moment so gracefully it is easy to forget that, like [the town of] Holt, it is a world created by one man.” —John Freeman, The Boston Globe

"A quiet and profound statement about endings, about change and death and endurance, and about the courage it takes to finally let go. . . . What's remarkable is Haruf's ability, once again, to square quotidian events with what it means to be alive and bound in ordinary pleasure with ordinary people [with] a matter-of-fact tone, with spare declarative sentences and plain-speak among the characters that is, in its bare-bones clarity, often heartbreakingly authentic."  —Debra Gwartney, The Oregonian

“What Haruf makes of this patch of ground is magic [and] Benediction spreads its blessing over the entire town.  Haruf isn’t interested in evil so much as the frailties that defeat us – loneliness, a failure to connect with one another, the lack of courage to change. . . . [He] makes us admire his characters’ ability not only to carry on but also to enjoy simple pleasures.” —Dan Cryer, San Francisco Chronicle

“We’ve waited a long time for an invitation back to Holt, home to Kent Haruf’s novels. . . He may be the most muted master in American fiction [and] Benediction seems designed to catch the sound of those fleeting good moments [with] scenes Hemingway might have written had he survived.” —Ron Charles, Washington Post

"A lovely book, surprisingly rich in character and event without any sense of being crowded. . . . Haruf is a master in summing up the drama that already exists in life, if you just pay attention." —Harper Barnes, St. Louis Post-Dispatch

“Absorbing [and] evocative. . . . Haruf doesn’t offer us any facile reconciliations. The blessings in Benediction are [not] easily won. For that very reason they are all the more believable and all the more unforgettable.” – Richard Wakefield, The Seattle Times

"Splendid. . . . As the expertly crafted structure of Benediction emerges, it becomes clear that [Haruf's many] characters trace the arc of a life. . . as we join [a good but flawed man] in his deepening appreciation for those around him, while counting down the remaining hours, in his life and our own." —Mike Fischer, Portland Press Herald

“Remarkable. . . . Haruf paints indelible portraits of drifting days that reveal unexpected blessings. . . . We may not always recognize the best moments—maybe because they are often as simple as eating off the good china at a backyard picnic—but he understands their power to make us human.” —Connie Ogle, The Miami Herald

"Itself a blessing. . . spare and unencumbered. . . . Haruf's great skill is in describing the plain ways of people who live in small places [and the war] going on between good and evil that we recognize as part of our nature. This is what makes Benediction a universal story, not a hometown tale." —Michael D. Langan, The Buffalo News

“Quiet, and intimate, and beautiful.” —Lisa McLendon, The Wichita Eagle

“If Hemingway had had more soul, he would've written a book like Benediction.” —Emma Broder, The Chicago Maroon

"Incisive, elegiac, and rhetorically rich. . . his finest expression yet of an aesthetic vision that, in spite of its exacting verisimilitude, achieves a mythic dimension rare in contemporary fiction. . . . Haruf's art is rigorous but transparent. Scene after scene, we appreciate that we are in the hands of a master of complex storytelling disguised as simple observation. . . . Reading [him], I am often reminded of the great Russian realists, who have a similar compressed intensity and who spent much of their writing time examining the lives of ordinary people living in small communities in wide-open spaces." —Kevin Stevens, The Dublin Review of Books

“Benediction suggests there’s no end to the stories Haruf can tell about Holt or to the tough, gorgeous language he can summon in the process.” —Paul Elie, The New York Times Book Review

“Haruf is the master of what one of his characters calls 'the precious ordinary'. . . . With understated language and startling emotional insight, he makes you feel awe at even the most basic of human gestures.” —Ben Goldstein, Esquire

“Grace and restraint are abiding virtues in Haruf's fiction, and they resume their place of privilege in his new work. . . . For readers looking for the rewards of an intimate, meditative story, it is indeed a blessing.” —Karen R. Long, The Cleveland Plain Dealer

“Haruf is maguslike in his gifts. . . to illuminate the inevitable ways in which tributary lives meander toward confluence. . . . Perhaps not since Hemingway has an American author triggered such reader empathy with so little reliance on the subjectivity of his characters. . . . [This] is a modestly wrought wonder from one of our finest living writers.” —Bruce Machart, The Houston Chronicle

“Both sad and surprisingly uplifting in its honest and skillful examination of death, families and friendship.” —Jason Swensen, Deseret News

“As Haruf's precise details accrue, a reader gains perspective: This is the story of a man's life, and the town where he spent it, and the people who try to ease its end. . . . His sentences have the elegance of Hemingway's early work [and his] determined realism, which admits that not all of our past actions or the reasons behind them are knowable, even to ourselves, is one of the book's satisfactions.” —John Reimringer, The Minneapolis Star-Tribune

“Reverberant… From the terroir and populace of his native American West, the author of Plainsong and Eventide again draws a story elegant in its simple telling and remarkable in its authentic capture of universal human emotions.” – Brad Hooper, Booklist