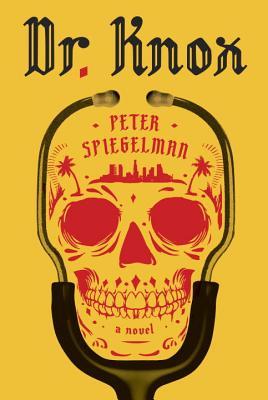 “Peter Spiegelman’s Dr. Knox is a bruised wonder of a crime novel. Filled with page-turning intrigue and an L.A. atmosphere so richly rendered you can practically smell the ‘eucalyptus and dust,’ it is both thrilling and rueful, harrowing and moving. DON'T MISS IT”
—Megan Abbott, award-winning author of The Fever

From the author of Red Cat and Thick as Thieves: a gripping new thriller about a medical doctor with a powerful humanitarian impulse, an unhealthy appetite for risk, and a knack for finding himself between a rock and a hard place.

Adam Knox comes from a long line of patrician Connecticut doctors—a line he broke to serve with an NGO in the war-torn Central African Republic. His attempt to protect his patients there from a brutal militia ended in disaster and disgrace, and now he runs a clinic near Los Angeles’s Skid Row, making ends meet by making house calls—cash only, no questions asked—on those too famous or too criminal to seek other medical care.

When a young boy is abandoned at his clinic, Knox is determined to find the boy’s family and save him from the not-so-tender mercies of the child welfare bureaucracy. But Knox’s search for the volatile woman who may or may not be the boy’s mother leads him and his friend, a former Special Forces operator, into a labyrinth of human traffickers, Russian mobsters, and corporate security thugs; and squarely into the sights of a powerful, secretive, and utterly ruthless family that threatens to destroy Dr. Knox and everything—and everyone—he holds dear.

PETER SPIEGELMAN is the author of Black Maps, which won the 2004 Shamus Award for Best First P.I. Novel, Death’s Little Helpers, Red Cat, and Thick as Thieves. He lives in Connecticut.

“Mr. Spiegelman has created a unique Southern California narrator-protagonist whose emergency-room crises are as exciting as car chases.”
—The Wall Street Journal

“Spiegelman doesn’t publish nearly as much as most crime-fiction authors, but when he does, it’s usually a jewel. And that’s especially true of his latest, which, by all indications, is the first in a series (Hallelujah for that!). . . . Spiegelman twists his way through the plot like a punt returner weaving through traffic, but, beyond that, his ability to burst his characters into throbbing life in a few short paragraphs—combined with a prose style capable of snapping our heads with a staccato succession of perfectly landed prose jabs—will leave readers rubbing their jaws in wonderment. Please, Dr. Knox, make more house calls soon.”
—Bill Ott, Booklist (starred review)

"[A] propulsive, intrigue-filled thriller . . . Spiegelman expertly doles out the suspense, while leaving his protagonist with some difficult moral choices."
—Publishers Weekly

“Dr. Knox is a stark, beautifully written revelation. As Ellroy did before him, Spiegelman turns a new page on LA neo-noir, and on the contradictions of that city: its glamour and gore, its wealthy and weak, its merciful and mercenary. Part Robin Hood, part Batman, Knox and Sutter are edgy urban knights for a dark, new age.”
—Reed Farrel Coleman, NY Times Bestselling author of Robert B. Parker’s The Devil Wins

“Peter Spiegelman’s Dr. Knox is a bruised wonder of a crime novel. Filled with page-turning intrigue and an L.A. atmosphere so richly rendered you can practically smell the ‘eucalyptus and dust,’ it is both thrilling and rueful, harrowing and moving. Don’t miss it.”
—Megan Abbott, award-winning author of The Fever and You Will Know Me