The Wheelman: A Novel (Paperback) 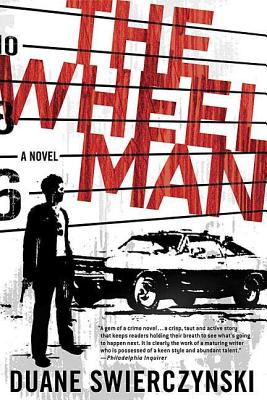 By Duane Swierczynski
$18.99
Out of Stock; Usually Arrives in 2-5 Days

Meet Lennon, a mute Irish getaway driver who has fallen in with the wrong heist team on the wrong day at the wrong bank. Betrayed, his money stolen and his battered carcass left for dead, Lennon is on a one-way mission to find out who is responsible—and to get back his loot. But the robbery has sent a violent ripple effect through the streets of Philadelphia. And now a dirty cop, the Russian and Italian mobs, the mayor's hired gun, and a keyboard player in a college rock band maneuver for position as this adrenaline-fueled novel twists and turns its way toward its explosive conclusion.
One thing's for sure: This cast of characters wakes up in a much different world by novel's end—if they wake up at all, in Duane Swierczynski's The Wheelman.

DUANE SWIERCZYNSKI is the author of The Wheelman, The Blonde, Severance Package, and Expiration Date, and writes for Marvel Comics. The Wheelman was nominated for the Gumshoe Award and was optioned for film. He lives in Philadelphia.

“If you are partial to past-paced thrillers that present this world as an unforgiving, blood-soaked wasteland, you should love Duane Swierczynski's first novel. Swierczynski's novel, like those of [Elmore] Leonard, offers an undertow of humor beneath the churning sea of man's inhumanity.” —The Washington Post

“Swierczynski has an uncommon gift for the banal lunacy of criminal dialogue, a delightfully devious eye for character and a surprisingly well-developed narrative for a beginner.” —The Chicago Tribune

“A great heist story in the rich tradition of Richard Stark's Parker novels and Stanley Kubrick's The Killing… keeps readers holding their breath to see what's going to happen next. It is clearly the work of a maturing writer who is possessed of a keen style and abundant talent.” —Philadelphia Inquirer

“I cancelled a night out and stayed up all night reading. That's how much I loved this book… at every turn, I was blindsided. Hilarious and bloody violent.” —Ken Bruen, author of the Shamus Award-winning The Guards

“Dark stuff… hilariously funny at the same time. Swierczynski has come up with his own twisted and thoroughly enjoyable genre. Bring on some more, sir.” —Rocky Mountain News

“Astonishing! Duane Swierczynski has written one of the great all-time heist novels and this guy's just getting started.” —Jason Starr, Barry Award-winning author of Twisted City

“Duane Swierczynski is one of the best new things to happen to crime fiction in a long time.” —Victor Gischler, Edgar-nominated author of Suicide Squeeze