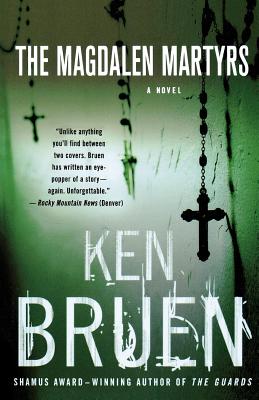 This is book number 3 in the Jack Taylor Series series.

Jack Taylor is walking the delicate edge of a sobriety he doesn't trust when his phone rings. He's in debt to a Galway tough named Bill Cassell, what the locals call a "hard man." Bill did Jack a big favor a while back; the trouble is, he never lets a favor go unreturned.

Jack is amazed when Cassell simply asks him to track down a woman, now either dead or very old, who long ago helped his mother escape from the notorious Magdalen laundry, where young wayward girls were imprisoned and abused. Jack doesn't like the odds of finding the woman, but counts himself lucky that the task is at least on the right side of the law.

Until he spends a few days spinning his wheels and is dragged in front of Cassell for a quick reminder of his priorities. Bill's goons do a little spinning of their own, playing a game of Russian roulette a little too close to the back of Jack's head. It's only blind luck and the mercy of a god he no longer trusts that land Jack back on the street rather than face down in a cellar with a bullet in his skull. He's got one chance to stay alive: find this woman.

Unfortunately, he can't escape his own curiosity, and an unnerving hunch quickly turns into a solid fact: just who Jack's looking for, and why, aren't nearly what they seem.

The Magdalen Martyrs, the third Galway-set novel by Edgar, Barry, and Macavity finalist and Shamus Award-winner Ken Bruen, is a gripping, dazzling story that takes the Jack Taylor series to explosive new heights of suspense.

“Readers will appreciate Bruen's trademark stripped-down noir poetry, his superbly rendered sense of place and his evocative portrait of a person balanced on the razor's edge.” —Publishers Weekly

“Even with an alcoholic's penchant for violence and manipulation, Taylor is a deeply compassionate man with a strong sense of humanity and justice. Bruen, who never wastes a word, combines a superb crime novel with a serious cautionary tale, told with unnerving, crystalline precision.” —Portland Oregonian

“A relentlessly dark yet never dreary series. An array of good writers, from Ralph W. Emerson to George P. Pelecanos, are quoted throughout. It's a class of writer that includes Bruen himself.” —Kirkus Reviews

“This third entry in Bruen's Jack Taylor series is arguably the bleakest to date, but also the best. Completely compelling….One of the best current crime series.” —Library Journal

“Raw and fiercely funny. [Jack] Taylor's not much of a detective and he's a mess of a human being, but he's also fabulous company.” —Seattle Times