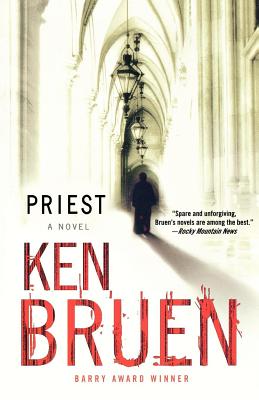 This is book number 5 in the Jack Taylor Series series.

Ireland, awash with cash and greed, no longer turns to the church for solace or comfort. But the decapitation of Father Joyce in a Galway confessional horrifies even the most jaded citizen.

Jack Taylor, devastated by the recent trauma of personal loss, has always believed himself to be beyond salvation. But a new job offers a fresh start, and an unexpected partnership provides hope that his one desperate vision--of family--might yet be fulfilled.

An eerie mix of exorcism, a predatory stalker, and unlikely attraction conspires to lure him into a murderous web of dark conspiracies. The specter of a child haunts every waking moment.

Explosive, unsettling, and totally original, Ken Bruen's writing captures the brooding landscape of Irish society at a time of social and economic upheaval. Priest is evidence of an unmistakable literary talent.

“There's music in his lament for the corruption of innocence and the loss of faith--in the government and the clergy--in 'the new Ireland,' even as he does battle with the demons that have claimed his own soul.” —The New York Times

“Bruen exploits the dark potential of the mystery form to its fullest...If a bottle of Bushmills could talk, it would sound like Jack Taylor.” —The Washington Post Book World

“Spare and unforgiving, Bruen's novels are among the best.” —Rocky Mountain News

“If your vision of Ireland still includes blarney and shamrocks, Ken Bruen is the writer to bring you up to date...Bruen is a wonderful writer. His prose is lean and spare and fun.” —The Globe and Mail (Toronto)

“Bruen has established himself as a master of hard-boiled noir.” —The Miami Herald

“Bruen writes tight, urgent, powerful prose, his dialogue is harsh and authentic and Jack Taylor has become one of today's most interesting shamuses.” —The Times (UK)