Aunt Julia and the Scriptwriter: A Novel (Paperback) 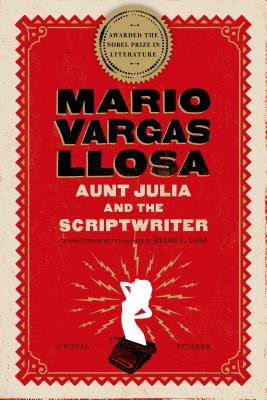 WINNER OF THE NOBEL PRIZE IN LITERATURE

Mario Vargas Llosa's brilliant, multilayered novel is set in the Lima, Peru, of the author's youth, where a young student named Marito is toiling away in the news department of a local radio station. His young life is disrupted by two arrivals.

The first is his aunt Julia, recently divorced and thirteen years older, with whom he begins a secret affair. The second is a manic radio scriptwriter named Pedro Camacho, whose racy, vituperative soap operas are holding the city's listeners in thrall. Pedro chooses young Marito to be his confidant as he slowly goes insane.

Interweaving the story of Marito's life with the ever-more-fevered tales of Pedro Camacho, Vargas Llosa's novel is hilarious, mischievous, and masterful, a classic named one of the best books of the year by the New York Times Book Review.

Mario Vargas Llosa is Peru's foremost author and the winner of the 2010 Nobel Prize in Literature. In 1994 he was awarded the Cervantes Prize, the Spanish-speaking world's most distinguished literary honor, and in 1995 he won the Jerusalem Prize. His many distinguished works include The Storyteller, The Feast of the Goat, Aunt Julia and the Scriptwriter, Death in the Andes, In Praise of the Stepmother, The Bad Girl, Conversation in the Cathedral, The Way to Paradise, and The War of the End of the World. He lives in London.

“A bedazzlement of entertainment.” —Time

“One of South America's finest contemporary writers.” —The Times (London)