Death in the Andes: A Novel (Paperback) 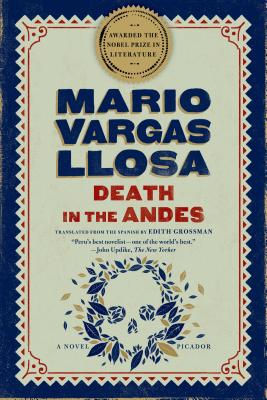 WINNER OF THE NOBEL PRIZE IN LITERATURE

In a remote Andean village, three men have disappeared. Peruvian Army corporal Lituma and his deputy Tomás have been dispatched to investigate, and to guard the town from the Shining Path guerrillas they assume are responsible. But the townspeople do not trust the officers, and they have their own ideas about what forces claimed the bodies of the missing men. To pass the time, and to cope with their homesickness, Tomás entertains Lituma nightly with the sensuous, surreal tale of his precarious love affair with a wayward prostitute. His stories are intermingled with the ongoing mystery of the missing men.

Death in the Andes is an atmospheric suspense story and a political allegory, a panoramic view of contemporary Peru from one of the world's great novelists.

Mario Vargas Llosa is Peru's foremost author and the winner of the 2010 Nobel Prize in Literature. In 1994 he was awarded the Cervantes Prize, the Spanish-speaking world's most distinguished literary honor, and in 1995 he won the Jerusalem Prize. His many distinguished works include The Storyteller, The Feast of the Goat, Aunt Julia and the Scriptwriter, Death in the Andes, In Praise of the Stepmother, The Bad Girl, Conversation in the Cathedral, The Way to Paradise, and The War of the End of the World. He lives in London.

“Well-knit social criticism as trenchant as any by Balzac or Flaubert . . . This is a novel that plumbs the heart of the Americas.” —The Washington Post Book World

“Meticulously realistic descriptions of this high, unforgiving landscape and the haunted people who perch there . . . merge into a surreal portrait of a place both specific and universal.” —Time