A Monstrous Regiment of Women: A Novel of Suspense Featuring Mary Russell and Sherlock Holmes (A Mary Russell Mystery #2) (Paperback) 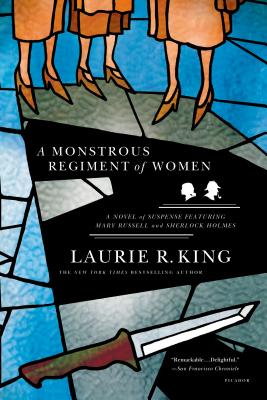 This is book number 2 in the A Mary Russell Mystery series.

Winner of the Nero Wolfe Award

It is 1921 and Mary Russell--Sherlock Holmes's brilliant apprentice, now an Oxford graduate with a degree in theology--is on the verge of acquiring a sizable inheritance. Independent at last, with a passion for divinity and detective work, her most baffling mystery may now involve Holmes and the burgeoning of a deeper affection between herself and the retired detective. Russell's attentions turn to the New Temple of God and its leader, Margery Childe, a charismatic suffragette and a mystic, whose draw on the young theology scholar is irresistible. But when four bluestockings from the Temple turn up dead shortly after changing their wills, could sins of a capital nature be afoot? Holmes and Russell investigate, as their partnership takes a surprising turn in A Monstrous Regiment of Women by Laurie R. King.

Laurie R. King is the Edgar Award–winning author of the Kate Martinelli novels and the acclaimed Mary Russell-Sherlock Holmes mysteries, as well as a few stand-alone novels. The Beekeeper’s Apprentice, the first in her Mary Russell series, was nominated for an Agatha Award and was named one of the Century’s Best 100 Mysteries by the Independent Mystery Booksellers Association. A Monstrous Regiment of Women won the Nero Wolfe Award. She has degrees in theology, and besides writing she has also managed a coffee store and raised children, vegetables, and the occasional building. She lives in northern California.

“The great marvel of King's series is that she's managed to preserve the integrity of Holmes's character and yet somehow conjure up a woman astute, edgy, and compelling enough to be the partner of his mind and as well as his heart. . . . Superb.” —The Washington Post Book World

“As audacious as it is entertaining and moving . . . What gives Laurie R. King's books such a rich and original texture is the character of Mary--totally believable in her own right, a tall and gangling orphan with a restless intellect and a great store of moral and physical courage.” —Chicago Tribune

“Extraordinary . . . A delight.” —The Washington Times