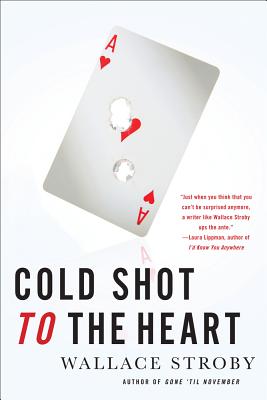 By Wallace Stroby
$20.99
Out of Stock; Usually Arrives in 5-7 Days
(This book cannot be returned.)

This is book number 1 in the Crissa Stone Novels series.

Career-criminal Crissa Stone never works too close to home, or with the same crew, or rushes a job. These rules have kept her from doing any time. They're the rules her mentor and lover taught her, rules he didn't follow as closely as he should've. Now he's up for parole, and Crissa needs to come up with the money to help grease the wheels. Word is that there's an illegal card game set for less than a week from now. The take? Plenty. Desperate, Crissa slaps a plan together, but when one of her crew starts shooting, she catches the attention of Eddie the Saint. A hit man, Eddie is no less of a pro than Crissa, and he could use the work.

One of the most talented writers working in crime fiction today, Wallace Stroby's Cold Shot to the Heart is a tight, propulsive story that will hold readers captive until well after all the crooks have fled the scene.

WALLACE STROBY is an award-winning journalist and a former editor at The Star-Ledger in Newark, New Jersey. He is the author of books including Cold Shot to the Heart, Gone 'til November, and The Barbed-Wire Kiss. He lives in New Jersey.

“Just when you think that you can't be surprised anymore, a writer like Wallace Stroby ups the ante.” —Laura Lippman

“Cold Shot to the Heart moves at a breakneck speed. . . . Stroby's sturdy plot is augmented by his intriguing look at how money corrupts and how even a crook can have a moral compass. Fans of Elmore Leonard and George V. Higgins will find much to like.” —Oline H. Cogdill, Chicago Tribune

“Another fast, taut winner from Stroby. As for Crissa, she may be crime fiction's best bad girl ever.” —Kirkus Reviews (starred review)