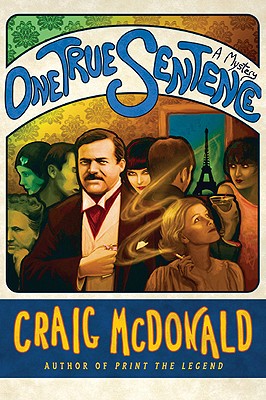 Paris, 1924. A city teeming with would-be poets, writers, and painters. Hector Lassiter, fledgling author and best friend of Ernest Hemingway, is crossing the Pont Neuf when he hears a body fall into the icy Seine — the first in a string of brutal murders of literary magazine editors that throw a shroud over the City of Light.

Frantic to stop the killings, Gertrude Stein gathers the most prominent crime and mystery writers in the city, including Hector and the dark, mysterious crime novelist Brinke Devlin. Soon, Hector and Brinke are tangled not only under the sheets, but in a web of murders, each more grisly than the next.

As he is drawn deeper into the hunt, Hector finds himself torn between three women with hidden agendas and dark imaginations. When Hector learns that the murders may be the work of a strange cult of writers who are targeting the literary set, Hemingway, Hector, and Brinke must scramble to find the killer before they become the next victims.

A Moveable Feast meets The Dante Club in this ­­­­exquisite mystery that takes readers from the cafés of Montparnasse, through the historic graveyards of Paris, to the smoky backrooms of bookstores and salons. As dark as the shadowy banks of the Seine and as addictive as absinthe, this unforgettable book will grab you and never let go.

CRAIG MCDONALD is an award-winning journalist, editor, and fiction writer. In 2008, his debut novel, "Head Games, "was nominated for an Edgar and was also a finalist for the Anthony, Gumshoe, and Crimespree awards for best first novel. "Print the Legend, "his most recent novel, was also published by Minotaur/Thomas Dunne Books.

"Vivid, remarkable characters--the historical people as well-drawn as the fictional ones!--in a rich, evocative setting, and a gruesome serial killer with one of the most unusual motives ever. Absolutely gripping!"--Diana Gabaldon, New York Times bestselling author of the Outlander series

“Craig McDonald proves he is a master of literary suspense in this riveting historical thriller set in the 1920s Paris of Ernest Hemingway and Gertrude Stein.  Complex protagonists, shocking murders, and a gripping tale will leave you wanting more.”--Stefanie Pintoff, Edgar-award winning author of A Curtain Falls

"Nobody does mad pulp history like Craig McDonald. Reading a Hector Lassiter novel is like having a great uncle pull you aside, pour you a tumbler of rye, and tell you a story about how the 20th century really went down." --Duane Swierczynski, author of Expiration Date

"A finely-crafted pulp historical mystery…While McDonald plucks your heartstrings, his wily hero Hector Lassiter will pound out a drum roll on your short ribs, and yes, you actually will be thankful for the experience." --Tom Piccirilli, author of Shadow Season

“The real stuff… Sharp, smart, and fascinating. McDonald brings alive a unique time and place with not only his talent for history but style that would make his subjects proud.”--Ace Atkins, author of Devil’s Garden and Infamous

“An amazing montage of mystery, murder, meta-fiction, and literary-history, quite unlike anything I’ve read before. ”--Craig Holden, author of The Jazz Bird

"Edgar-nominated author McDonald takes such care to describe the American literary expatriate community in Paris in the years after World War I that readers will feel as if they are walking alongside Hemingway and his buddies as they look for a vicious killer. Certain to attract Hemingway afficionados and readers who enjoy hard-boiled historical crime fiction." --Library Journal

"Another juicy setting for McDonald to mix real people, well-known parts of the Hemingway legend, invented characters, and murders most foul... McDonald paints a vivid picture of Lost Gen life in Paris." --Booklist