Cold Shot to the Heart (Hardcover) 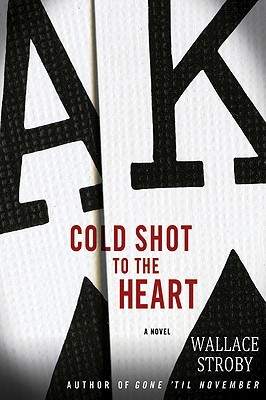 “Just when you think that you can’t be surprised anymore, a writer like Wallace Stroby ups the ante.”
---Laura Lippman, author of I’d Know You Anywhere

Crissa Stone is a career criminal. A complete pro, she never works too close to her New York City home, rarely signs on with the same crew, and never rushes a job. These are the rules that have kept her from getting caught, from doing time. They’re the rules her mentor and lover taught her, rules he didn’t follow as closely as he should’ve. Now he’s up for parole, and Crissa needs to come up with some real money real fast to help grease the wheels.

Word is that there’s an illegal card game set for less than a week from now. The take? As much as seven figures. Desperate, Crissa slaps a plan and a crew together.

It’s robbery, not murder. But when one of her crew loses his cool and they have to abandon the plan, she catches the attention of Eddie the Saint. A hit man recently released from prison, Eddie is no less of a pro than Crissa, and he could use the work, not to mention all that money.

One of the most talented writers working in crime fiction today, Wallace Stroby has written a tight, propulsive story that will hold readers captive until well after all the crooks have fled the scene.

WALLACE STROBY is an award-winning journalist and a former editor at "The Star-Ledger" in Newark, New Jersey. This is his fourth novel, following the acclaimed "Gone 'til November" and the Barry Award finalist "The Barbed-Wire Kiss." He lives in New Jersey.

Praise for Cold Shot to the Heart

“Another fast, taut winner from Stroby. As for Crissa, she may be crime fiction’s best bad girl ever.”
--Kirkus Reviews (starred review)

“This is a raw, hard-edged, nourish novel, dark and violent. It’s good, too… Stroby has been called a nascent Crumley or Pelecanos. He shares their sense that cynicism is the last post left to a romantic.”
--­Booklist

“Stroby pits a resourceful crook against a ruthless killer in this well-crafted crime novel… The action builds to the inevitable and exciting showdown.”
--Publishers Weekly

“Told in a taut style that doesn’t waste a single word, Stroby’s latest features an interesting anti-heroine…. [A] straightforward story of two criminals on a collision course.”
--RT Book Reviews

Praise for Gone ’til November

“This hardboiled novel, filled with believable characters, puts author Wallace Stroby in the company of noir masters like Dashiell Hammett and Elmore Leonard.”
---The Huffington Post

“In Gone ’til November, Wallace Stroby’s mastery of character and dialogue is mated to a hellacious narrative engine. His heroine, Sara Cross, is a wonderful creation.”
---George Pelecanos

Praise for The Heartbreak Lounge

“Stroby continues to show a real flair for blending noir into a tightly plotted fireball of suspense. . . . Stroby infuses his action-packed story with unpredictable twists. The Heartbreak Lounge continues the high standards Stroby set in his debut.”
---South Florida Sun-Sentinel

“A cat-and-mouse story that inspires just the tiniest bit of sympathy for the predator . . . Readers will have a hard time putting down this three-ring circus of a book.”
---The Star-Ledger (Newark)

Praise for The Barbed-Wire Kiss
“A scorching first novel that mixes the melancholic heart of tough-guy fiction with a fierce and violent gangster plot.”
---The Washington Post Book World

“Stroby does wonders with his blue-collar characters.”
---The New York Times Book Review