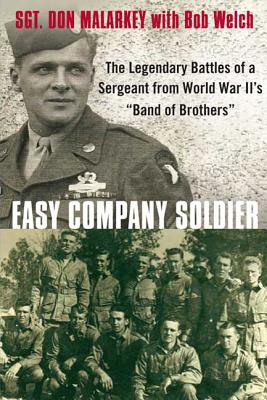 Elite paratrooper Sgt. Don Malarkey takes us not only into the World War II battles fought from Normandy to Germany, but into the heart and mind of a soldier who lost his best friend during the nightmarish engagement at Bastogne.

Drafted in 1942, Malarkey arrived at Camp Toccoa in Georgia and was one of the one in six soldiers who earned their Eagle wings. He went to England in 1943 to provide cover on the ground for the largest amphibious military attack in history: Operation Overlord. In the darkness of D-day morning, Malarkey parachuted into France and within days was awarded a Bronze Star for his heroism in battle. He fought for twenty-three days in Normandy, nearly eighty in Holland, thirty-nine in Bastogne, and nearly thirty more in and near Haugenau, France, and the Ruhr pocket in Germany.

Easy Company Soldier is his dramatic tale of those bloody days fighting his way from the shores of France to the heartland of Germany, and the epic story of how an adventurous kid from Oregon became a leader of men.

DON MALARKEY was born in 1921, and grew up in Astoria, Oregon. After trying to enlist in several branches of the service, he was drafted in 1942 and spent more consecutive days in combat than any other member of “E Company,” 506th Regiment, 101st Airborne--the most recognized fighting unit in American history. Today he lives in Oregon.

BOB WELCH is a nationally recognized author and journalist whose book about the first World War II nurse to die after the landings at Normandy, American Nightingale, was featured on ABC’s “Good Morning America,” and was an Oregon Book Award finalist. He lives in Oregon.

“Author [Don Malarkey] shares his story of those bloody days fighting his way from the shores of France to the heartland of Germany, and the epic story of how an adventurous kid from Oregon became a leader of men.” —Powell Valley News

"First of all, you're going to love this book . . . together, we were the best (not bragging). In training and in combat, we never had any problems. We've been friends for life, over sixty-five years. He's my hero.” —William "Wild Bill" Guarnere, member of Easy Company and coauthor of the New York Times bestseller Brothers in Battle, Best of Friends

“Don Malarkey is a staunch patriot who truly understands the principles for which we fought. He contributed his all in building the reputation of the 101st Airborne as a great fighting unit. His life today epitomizes the standards to which all good Americans should strive to emulate.” —Lt. Lynn "Buck" Compton, member of Easy Company and author of Call of Duty

"Don Malarkey: an outstanding soldier in combat, a gentleman with the memory of an elephant who I always will consider to be an esteemed friend.” —Dick Winters, Commander of Easy Company and author of the New York Times bestseller Beyond Band of Brothers

“Very conscientious, very compassionate. We had great men in Easy Company and Don was one of the best. When I joined the men [in England], he took care of me like I was a Currahee man. He was a dead shot with the mortar.” —Ed "Babe" Heffron, member of Easy Company and co-author of the New York Times bestseller Brothers in Battle, Best of Friends