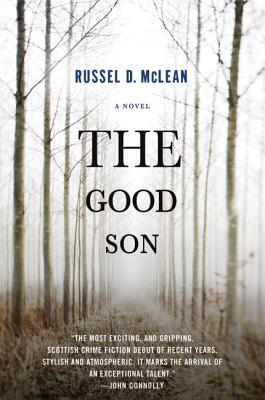 By Russel D. McLean
Email or call for price
Out of Print

"THE GOOD SON is the most exciting, and gripping, Scottish crime fiction debut of recent years. Stylish and atmospheric, it marks the arrival of a exceptional talent." --John Connolly

"McLean has all the merits of this brilliant writer [Jean-Patrick Manchette] with the added bonus of a Scottish sense of wit that is like no other." --Ken Bruen

"Scottish crime fiction is entering a new era and Russel McLean is at the vanguard. A thrilling new writer, a brilliant debut...The Good Son is very good indeed." --Tony Black

Recipient of widespread praise for his award-winning crime short stories, Russel McLean's full-length debut has been characterized by key crime authors and critics alike as the emergence of a major talent.

There is something rotten behind the apparent sucide of Daniel Robertson and it's about to come bursting into the life of J. McNee, a Scottish private investigator with a near-crushing level of personal baggage. James Robertson, a local farmer, finds his estranged brother's corpse hanging from a tree. The police claim suicide. But McNee is about to uncover the disturbing truth behind the death. With a pair of vicious London thugs on the move in the Scottish countryside, it's only a matter of time before people start dying. As the body count rises, McNee finds himself on a collision course with his own demons and an increasing array of brutal killers in a violent, bloody showdown that threatens to leave none involved alive. Plumbing the depths of love, loss, betrayal, and one broken man's attempt to come to terms with his past, The Good Son successfully blends the classic style of the gumshoe era with the outer edges of modern noir.

Russel McLean writes for Crime Spree Magazine, The Big Thrill, At Central Booking and Crime Scene Scotland. His short fiction has been published in crime magazines in both the US and the UK. He is the author of The Good Son and The Lost Sister. He lives in Dundee, Scotland.

"The future of crime fiction is in good hands." - Crimespree Magazine

"The Good Son is the most exciting, and gripping, Scottish crime fiction debut of recent years. Stylish and atmospheric, it marks the arrival of an exceptional talent." - John Connolly, author of the Charlie Parker mysteries

"Clever, tough, witty... a great character study with a wonderful plot and plenty of atmosphere." - The Globe and Mail

"A highly recommended crime thriller... [I] hope that we haven't seen the last of the haunted PI McNee." - Gumshoe