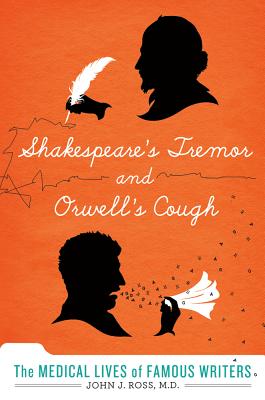 By John J. Ross
$19.99
Backordered. Place an order and we will let you know when to expect your book.

"The doctor suddenly appeared beside Will, startling him. He was sleek and prosperous, with a dainty goatee. Though he smiled reassuringly, the poet noticed that he kept a safe distance. In a soothing, urbane voice, the physician explained the treatment: stewed prunes to evacuate the bowels; succulent meats to ease digestion; cinnabar and the sweating tub to cleanse the disease from the skin. The doctor warned of minor side effects: uncontrolled drooling, fetid breath, bloody gums, shakes and palsies. Yet desperate diseases called for desperate remedies, of course."

Were Shakespeare's shaky handwriting, his obsession with venereal disease, and his premature retirement connected? Did John Milton go blind from his propaganda work for the Puritan dictator Oliver Cromwell, as he believed, or did he have a rare and devastating complication of a very common eye problem? Did Jonathan Swift's preoccupation with sex and filth result from a neurological condition that might also explain his late-life surge in creativity? What Victorian plague wiped out the entire Bronte family? What was the cause of Nathaniel Hawthorne's sudden demise? Were Herman Melville's disabling attacks of eye and back pain the product of "nervous affections," as his family and physicians believed, or did he actually have a malady that was unknown to medical science until well after his death? Was Jack London a suicide, or was his death the product of a series of self-induced medical misadventures? Why did W. B. Yeats's doctors dose him with toxic amounts of arsenic? Did James Joyce need several horrific eye operations because of a strange autoimmune disease acquired from a Dublin streetwalker? Did writing "Nineteen Eighty-Four" actually kill George Orwell? The Bard meets "House, M.D." in this fascinating untold story of the impact of disease on the lives and works of some the finest writers in the English language. In "Shakespeare's Tremor and Orwell's Cough"," " John Ross cheerfully debunks old biographical myths and suggests fresh diagnoses for these writers' real-life medical mysteries. The author takes us way back, when leeches were used for bleeding and cupping was a common method of cure, to a time before vaccinations, sterilized scalpels, or real drug regimens. With a healthy dose of gross descriptions and a deep love for the literary output of these ten greats, Ross is the doctor these writers should have had in their time of need.

JOHN J. ROSS is a physician at Brigham and Women's Hospital in Boston and an assistant professor of medicine at Harvard Medical School. He lives in the Boston area with his family.

"Dr. Ross hits his narrative stride... in chapter after chapter. The stories of the wounded storytellers unfold smoothly on the page, as mesmerizing as any they themselves might have told, those squinting, wheezing, arthritic, infected, demented, defective yet superlative examples of the human condition."-- The New York Times

"[This] engrossing account of the illnesses endured by Shakespeare, Milton, Swift, the BrontÃ«s, Hawthorne, Melville, Yeats, Jack London, Joyce and Orwell...which deftly mixes close reading and diagnostic acumen, will stay with me for a long time. I have scarcely touched on the richness of this witty and deeply humane book. It would be worth reading for the extraordinary tale of the pathologically shy Hawthorne...Dr. Ross avoids the common mistake of overconfidence in his retrospective diagnoses, aware that nothing fits so neatly as a wrong diagnosis. And he avoids the reductive temptation of explaining the genius of his writers by pathologies that are, after all, suffered also by the untalented. Though some of his stories are familiar, they have never, in my experience, been told so well. Given that many of Dr. Ross's subjects were suffering from infectious diseases, it helps that this is his area of expertise. But he is also a penetrating literary critic and a perceptive and humane observer of the lives of writers and of those in their orbit. His light touch with cultural, social and political history is something from which many of the professionals in literary studies could learn. This is a book to which I shall return again and again."--The Wall Street Journal

"Especially recommended for readers who enjoy historical context with their great books."--Kirkus Reviews

"Most writers aren't doctors. And most doctors aren't writers. When the two talents coincide, readers are treated to rare wisdom and novel insights. John Ross skillfully walks us through a clinic of the famous unwell.”—Nassir Ghaemi, author of A First-Rate Madness and Professor of Psychiatry, Tufts University School of Medicine

“We always long to know writers better: more than just their words, we want to immerse ourselves in their lives, to really feel what they felt. This book does that, plunging you in the day-to-day pains and struggles of some of the most celebrated names in the canon."--Sam Kean, author of The Disappearing Spoon and The Violinists’ Thumb

"If this irresistibly entertaining collection of medical biographies is anything to go by, its author would make a crackerjack after-dinner speaker.Each section consists of a whirlwind tour through the life of a famous literary figure from a doctor's perspective, some of it imagined, and all of it punctuated by witty and fun-loving asides...what sets Ross apart is his pure storytelling ability.Using a fluid and unpretentious style, much like fellow physician and writer Atul Gawande's, he excels at condensing massive amounts of research into pleasurable reading."--Winnipeg Free Press

"The book is rather like a gripping medical detective book as Ross works out what was wrong with a collection of literary greats."-- The Daily Telegraph

"Ross has nicely merged biographical data for each author with insightful discussions of his proposed medical diagnoses, and how their symptoms and treatments might have affected their work. While those in the medical community will find this book of interest, it is wonderfully engaging, often witty and quite intriguing to those of us outside of it, too."--Shelf Awareness