Nights of the Red Moon (Hardcover) 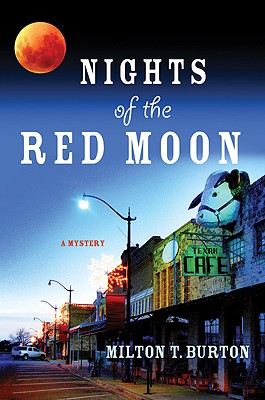 By Milton T. Burton
$24.99
It's complicated, and may be unavailable. Place an order and we will contact you with the expected arrival date.

It’s not hard for longtime Sheriff Bo Handel to keep Texas' Caddo County in line. He handles petty crimes and rabble rousers, runs a competent police force and maintains a relationship with his steady girlfriend while keeping things quiet.

But when the local minister’s wife, Amanda Twiller, is murdered and dumped on the church’s front, Bo suddenly finds himself with his hands full. Unfortunately for Bo, finding Amanda’s killer won’t be as easy as rounding up the town’s usual suspects. He’ll have to get past sleazy attorneys and drug lords first. When he discovers that Amanda was not only addicted to narcotics but also having an affair with one of the roughest men in town, the lazy days of his past are a distant memory.

Soon, Bo realizes there are only so many cocaine kings and Mob bosses that one man can juggle. But the murderer is out there, and it’s up to Bo to find out who it is. This small town sheriff is used to a light workload. So what happens when heavy crime comes to town?

MILTON T. BURTON is the author of two previous crime novels. He has been variously a cattleman, a political consultant, and a college history teacher. Burton lives in Jacksonville, Texas.

"Milton Burton writes about East Texas with wit, spice, and insight.  His Caddo County sheriff, Bo Handel, has a shrewd mind to go along with his fancy pistol.  He's the kind of man Sheriff Dan Rhodes would share a Dr Pepper with any day." --Bill Crider, author of Murder in Four Parts "Burton sets Sheriff Handel in motion against the local forces of greed, hypocrisy, lust and everyday human folly. It's a warm, wise and witty book, and when I set it down I felt the characters of Caddo County nestling into my memory, creating a hunger for return."

--David Corbett, Edgar-nominated author of Do They Know I'm Running?

"Whoever reads this book will find a treasure trove of experience in small County Law enforcement, told by a writer who knows East Texas, its people and history. It will be hard for any reader to put down. Milton produces a great read with his knowlege of crime,corruption and law ennforcement both past and present." --Captain Jack Dean, Texas Rangers Co.D