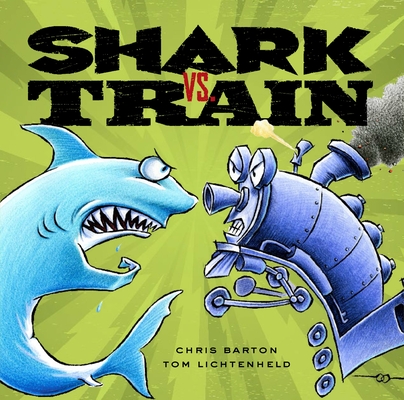 By Chris Barton, Tom Lichtenheld (Illustrator)
$18.99
On Our Shelves Now

“Such boy fun when a shark and a train try to outdo each other. Each page brings a funnier situation than before, and by the end, everyone is laughing. A great read aloud with perfect illustrations.”
— Valerie Koehler, Blue Willow Bookshop, Houston, TX

Shark VS. Train!
WHO WILL WIN?!

If you think Superman vs. Batman would be an exciting matchup, wait until you see Shark vs. Train. In this hilarious and wacky picture book, Shark and Train egg each other on for one competition after another, including burping, bowling, Ping Pong, piano playing, pie eating, and many more! Who do YOU think will win, Shark or Train?

[star] "This is a genius concept." -- Publishers Weekly, starred review

[star] "Lichtenheld's snarling shark and grimacing train are definitely ready for a fight, and his scenarios gleefully play up the absurdity. The combatants' expressions are priceless when they lose. A glum train in smoky dejection, or a bewildered, crestfallen shark? It's hard to choose; both are winners." -- Kirkus, starred review

Chris Barton lives in Austin, Texas, with his wife and two young sons, who inspired Shark VS. Train while bantering with Daddy.

Tom Lichtenheld is the illustrator of What Are You So Grumpy About?, What's with This Room? and the New York Times bestseller Duck! Rabbit! He is a creative director at an advertising firm, and lives in Illinois with his wife.

*"This inspired pairing, executed with ingenuity and packed with action and humor, is a sure winner."—School Library Journal (starred review)

*"Lichtenheld's snarling shark and grimacing train are definitely ready for a fight, and his scenarios gleefully play up the absurdity. The combatants' expressions are priceless when they lose. A glum train in smoky dejection, or a bewildered, crestfallen shark? It's hard to choose; both are winners."—Kirkus Reviews (starred review)

*"This is a genius concept ... Just when readers will think the scenarios can't get more absurd, the book moves into even funnier territory. ... Lichtenheld's watercolor cartoons have a fluidity and goofy intensity that recalls Mad magazine, while Barton gives the characters snappy dialogue throughout."—Publishers Weekly (starred review)

"Barton's imaginative and wacky scenarios are knocked home by Lichtenheld's ferociously funny artwork and will leave kids measuring up their dump truck and T-Rex for the next tale of the tape."—Booklist

"Barton's deadpan text-sparked with dialogue balloons that give the characters both personality and one-liners is matched by Lichtenheld's spot-on visual humor."—The Horn Book