The Dallas Cowboys: The Outrageous History of the Biggest, Loudest, Most Hated, Best Loved Football Team in America (Paperback) 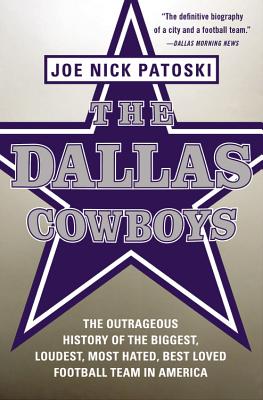 The definitive, must-have account of the all-time players, coaches, locker rooms and boardrooms that made the Dallas Cowboys "America's Team."

Since 1960, the Cowboys have never been just about football. From their ego-driven owner and high-profile players to their state-of-the-art stadium and iconic cheerleaders, the Cowboys have become a staple of both football and American culture since the beginning. For over 50 years, wherever the Cowboys play, there are people in the stands in all their glory: thousands of jerseys, hats, and pennants, all declaring the love and loyalty to one of the most influential teams in NFL history. Now, with thrilling insider looks and sweeping reveals of the ever-lasting time, place, and culture of the team, Joe Nick Patoski takes readers - both fans and rivals alike - deep into the captivating world of the Cowboys.

Joe Nick Patoski is the author of the award-winning Willie Nelson: An Epic Life as well as biographies of Stevie Ray Vaughan and Selena. He has written for Texas Monthly, Rolling Stone, No Depression, Country Music, TV Guide, and the Austin American-Statesman. He lives in the Texas Hill Country.

"'America's Team' has had its share of outsize characters, and this raucous his­tory places the franchise against the political and socioeconomic backdrop of its sprawling home­town." -- New York Times Book Review—-

"The Dallas Cowboys stands as the definitive biography of a city and a football team." -- Allen Barra, The Dallas Morning News—-

"It's hard to match the thoroughness of the account presented by Mr. Patoski.... The Dallas Cowboys adroitly traces the ascendancy of the team while shedding light on its unique position today as an athletic, commercial and cultural powerhouse." -- The Wall Street Journal—-

"Patoski's a natural storyteller.... This book couldn't have been written by anyone else." -- The Austin American-Statesman—-

"If you like football, and particularly the Cowboys, you'll be hard-pressed to find a better storyteller than Patoski." -- The San Angelo Standard Times—-