Woe to Live On: A Novel (Paperback) 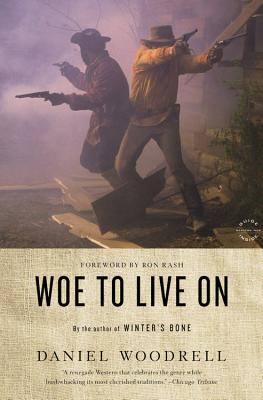 Set in the border states of Kansas and Missouri, Woe to Live On explores the nature of lawlessness and violence, friendship and loyalty, through the eyes of young recruit Jake Roedel. Where he and his fellow First Kansas Irregulars go, no one is safe, no one can be neutral. Roedel grows up fast, experiencing a brutal parody of war without standards or mercy. But as friends fall and families flee, he questions his loyalties and becomes an outsider even to those who have become outlaws.

PRAISE FOR WOE TO LIVE ON

"[A] fine novel...Daniel Woodrell has captured the devastation of war and, more importantly, the twisting of men's minds."—United Press International

"The violence is fast and understated, and bawdy humor relieves the story's intensity."
—Kansas City Star

"A renegade Western...that celebrates the genre while bushwhacking its most cherished traditions...Jake Roedel recites his tale of woe in an improbably rustic idiom, with a malignant humor and a hip sensibility that are wise beyond his years and way ahead of his times."
—Chicago Tribune

"Woodrell pins it down just right...speaks to the universal cruelty of civil war."
—St. Louis Post-Dispatch