Give Us a Kiss: A Novel (Paperback) 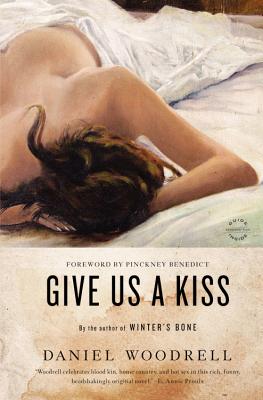 By Daniel Woodrell, Pinckney Benedict (Foreword by)
$15.99
On Our Shelves Now

"My imagination is always skulking about in a wrong place." And now Doyle Redmond, thirty-five-year-old nowhere writer, has crossed the line between imagination and real live trouble. On the lam in his soon-to-be ex-wife's Volvo, he's running a family errand back in his boyhood home of West Table, Missouri -- the heart of the red-dirt Ozarks. The law wants his big brother, Smoke, on a felony warrant, and Doyle's supposed to talk him into giving up. But Smoke is hunkered down in the hills with his partner, Big Annie, and her nineteen-year-old daughter, Niagra, making other plans: they're about to harvest a profitable patch of homegrown marijuana.

Doyle takes just one look at Niagra's flattering red boots before joining his brother's scheme. Of course it means dealing with the law and maybe worse -- the Dollys. A legendary clan of largely criminal persuasion, the Dollys have been feuding with the Redmonds for generations. Now they want a piece of Smoke's cash crop, even if it means killing to get it. Doyle is fast realizing that yes, you can always put the country back in the boy...but sometimes that's not smart.

"Woodrell knows deeply the subjects he writes on . . . Most important, he knows the voices of his people, and he never sounds a false or condescending note."
—Pinckney Benedict, Washington Post

"He celebrates blood kin, home country and hot sex in this rich, funny, headshakingly original novel. Woodrell is a ladystinger of a writer."
—Annie Proulx

"A backcountry Shakespeare....The inhabitants of Daniel Woodrell's fiction often have a streak that's not just mean but savage; yet physical violence does not dominate his books. What does dominate is a seasoned fatalism....Woodrell has tapped into a novelist's honesty, and lucky for us, he's remorseless that way."
—Los Angeles Times