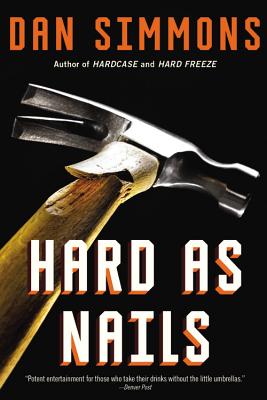 This is book number 3 in the The Kurtz Series series.

Ex-PI Joe Kurtz's survival is on the line when an ambush leaves him badly wounded and his parole officer, Peg O'Toole, clinging to life. Their respective professions have ensured that neither suffers from a shortage of enemies, so narrowing down the suspects isn't easy. But Kurtz knows who's at the head of his list: Angelina Farino Ferrara, the lethal beauty who leads the Farino crime family, and her mob rival, Toma Gonzaga.

"Readers picking up a copy of Hard as Nails,the latest in Simmons' Joe Kurtz series, can expect a whole lot of action and thrills...a hard-charging, pile-driving crime-thriller that bull-dogs its way to several climaxes...a potent entertainment for those who take their drinks without the little umbrellas."—Denver Post

"There's hard-boiled detective fiction and then there are the Joe Kurtz thrillers from Dan Simmons. The Kurtz books make the majority of noir novels read like tea cozy mysteries...[The] Kurtz novels are some of the best thrillers you'll find."
—Rocky Mountain News

"PI Joe Kurtz is back in the wringer, and the versatile Simmons cranks it for all its worth...A nice, dark, all-purpose thriller with some of the appeal of Mike Hammer, Parker or Burke, and all the fun of Mac Bolan, Executioner."
—Booklist

"The suspense is irresistible."
—The Charlotte Observer