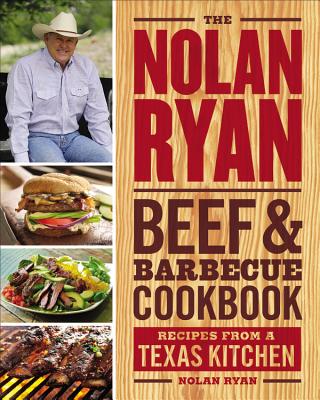 Legendary pitcher Nolan Ryan grew up in Texas and early on developed a passion for cattle ranching that rivaled his interest in baseball. His first cookbook offers 75 recipes for sizzling T-bone and rib-eye steaks, mouthwatering burgers, slow-cooked barbecue ribs, and more.

Working with chef Cristobal Vazquez, Nolan presents a fresh take on the Tex-Mex standards of his childhood. The book includes family recipes for Sunday roasts and brisket, savory side dishes, and a few favorite desserts as well, including Ruth Ryan's Special Occasion Carrot Cake. In the accompanying texts Nolan shares his love of the food of the Southwest and the lessons he's learned in a remarkable career in baseball and in cattle ranching.

Nolan Ryan had a legendary major league baseball career, where he distinguished himself as a strikeout leader, and he is the former CEO of the Texas Rangers. He has also had a passion for cattle ranching since he was a boy, and he is spokesperson for Nolan Ryan Natural Beef and one of the most influential figures in the beef industry in the United States. He lives in Georgetown, Texas.

"This is some soul-satisfying beef."—The Dallas Morning News

"Simple, honest and full-flavored, the book's 75 recipes might just make for a new series of home runs for the home cook."—Greg Morago, The Houston Chronicle

"Baseball, barbecue and beef are among the loves of the famed former pitcher for the Texas Rangers. . . . His take on grilling beef ribs using Asian ingredients couldn't be easier or more delicious."—The Detroit News