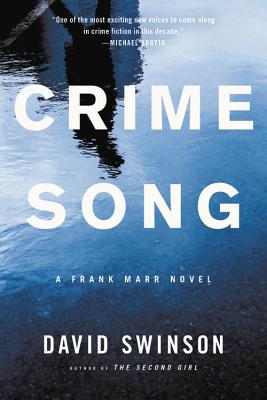 The return of Frank Marr, the "refreshing" protagonist of one of the New York Times' Best Crime Novels of 2016.

David Swinson is a retired police detective from the Metropolitan Police Department in Washington, DC, having been assigned to Major Crimes. Swinson is the author of the critically acclaimed Frank Marr Trilogy - The Second Girl, Crime Song and Trigger, and the standalone City on the Edge. He lives in Northern Virginia.

"Marr is easy to take, a decent guy with a sense of honor. And since Swinson is one of the best dialogue hounds in the business, Marr is blessed with some terrific street talk."—The New York Times Book Review

Frank Marr is "one of the genre's most damaged yet empathetic characters. The writing feels as authentic and true to the street as The Wire--which for crime writers is about the highest praise there is."—Casey Barrett, Village Voice

"Former DC detective Swinson knows his stuff. . . . His second in the Frank Marr series features sharp prose, spot-on dialogue, and a protagonist as complicated and unlikely as he is appealing. Fans of gritty crime fiction will want to add Swinson to their reading lists."—Booklist (starred review)

"David Swinson is one of the most exciting new voices to come along in crime fiction in this decade, and Crime Song is Exhibit A of his remarkable talent. Swinson's writing is heartfelt, powerful, and authentic, and Frank Marr is as fully rendered as any detective in recent memory."—Michael Koryta, bestselling author of Rise the Dark

"Frank Marr is a straight-up addict. His life, a train wreck. And he's the good guy. Welcome to the world of David Swinson, author of one of the most compelling P.I. series to come along in a while. Pick up a copy of Crime Song. You'll love it."—Michael Harvey, New York Times bestselling author of Brighton

"A veteran detective, David Swinson knows DC's secrets and it shows in this killer noir, so authentic it'll make you get up and lock your doors. Crime Song is even better than the fantastic TheSecond Girl and Swinson writes with a refreshing, understated realness. This is right up there with Richard Price and The Wire."—Matthew Quirk, New York Times bestselling author of Dead Man Switch

"Swinson delivers a superb second installment (after The Second Girl) in the "Frank Marr" series. Readers of Dennis Lehane, Richard Price, and George Pelecanos as well as fans of The Wire will appreciate the gritty depiction of the mean inner-city streets of our nation's capital."—Library Journal (starred review)

"Smart and sharp . . . Swinson, a retired detective himself, knows his way around mean streets. . . . Through all the plot twists of this well-designed mystery, what comes through most are Swinson's characters--particularly Marr, who attracts affection and respect, even when he is at his worst."—The National Book Review

"Crime Song is fast and rough and great. The atmosphere is perfect. The details are perfect. Only a cop, someone who's really lived in this world, could get so much so right."
—James O. Born, bestselling author of Walking Money