The Martini Shot: A Novella and Stories (Hardcover) 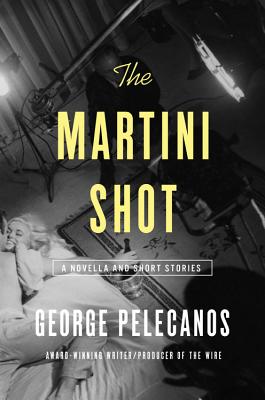 By George Pelecanos
$25.00
Email or call for price.

Short stories and a novella from one of crime fiction's most revered writers.

Whether they're cops or conmen, savage killers or creative types, gangsters or God-fearing citizens, George Pelecanos' characters are always engaged in a fight for their lives. They fight to advance or simply to survive; they fight against odds, against enemies, even against themselves. In this, his first collection of stories, the acclaimed novelist introduces readers to a vivid and eclectic cast of combatants.

A seasoned claims investigator tracks a supposedly dead man from Miami to Brazil, only to be thrown off his game by a kid from the local slum. An aging loser takes a last stab at respectability by becoming a police informant. A Greek-American couple adopts an interracial trio of sons and then struggles to keep their family together, giving us a stirring bit of background on one of Pelecanos' most beloved protagonists, Spero Lucas. In the title novella - which takes its name from Hollywood slang for the last shot of the day, the one that comes before the liquor shots begin - we go behind the scenes of a television cop show, where a writer gets caught up in a drama more real than anything he could have conjured for a script.

By turns heartbreaking and humane, brutal and funny, these finely constructed tales expose the violence and striving beneath the surface of any city and within any human heart. Tough, sexy, fast-paced, and crackling with energy, The Martini Shot is Pelecanos at his very best.

Praise for THE MARTINI SHOT:

"Here we see what makes Pelecanos' best writing so resonant: the sense of longing, of miscommunication, the way love does not enlarge us but rather makes us small."
—David L. Ulin, Los Angeles Times

"His writing is properly hard-boiled, his heroes are attractively flawed and his villains leave trails of blood from here to yonder. But even at his most gripping...he sets his aims high, bringing a sociologist's concerns to the street -level dramas that play out in his hometown of Washington, D.C."
—Lloyd Sachs, Chicago Tribune

"fast, dark, and dangerous...The gritty world [Pelecanos] knows so well provides ample fodder for the vignettes in this book, the characters are strong and the dialogue is sharp. The collection is a solid read for anyone who's a fan of crime writing and especially Pelecanos' work."
—Tim Alamenciak, Toronto Star

"bracing and witty...an inventive study of deception and fakery--one of Pelecanos's best works, at any length."
—Mark Athitakis, The Washington Post

"serves as an introduction to his dark, unblinking vision and a reason to stay until the night's bitter end. Don't miss this collection, a must-have for newcomers and longtime fans alike."
—Joe Hartlaub, Book Reporter

Praise for THE DOUBLE:

"It's astonishing all the good stuff Pelecanos can pack into one unpretentious book that make the story so rich."—Marilyn Stasio, New York Times Book Review


"The author laces his story with vivid descriptions of Washington's changing urban landscape. The writing is taut, the violence is graphic and the characters are so well-drawn that they step off the page and into your life. The Double is as good as it gets."—Bruce DeSilva, Associated Press

Praise for THE CUT:

"The writing is spare; the dialogue rings with authenticity; and walking D.C.'s mean streets with Lucas is the next best thing to being there. Easily the best crime novel I've read this year."—Hallie Ephron, Boston Globe

"Every time I read one of George Pelecanos's novels, I'm left a little awed...The guy's a national treasure."—Dennis Lehane

"A lean, swift, atmospheric detective novel...The characters-good-hearted, ill-intentioned or in between-are shown by Mr. Pelecanos with loving clarity, free of cliché, condescension or illusion. Spero Lucas is an engagingly layered character...The Cut is a resourceful and notably original work the delivers the thrills of an action movie and the poignancy of fine storytelling."—Tom Nolan, Wall Street Journal