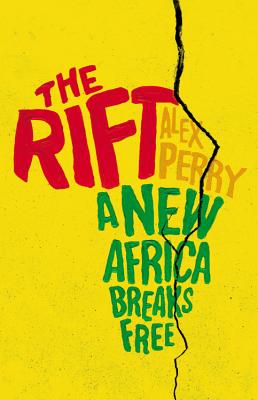 A vivid, powerful, and controversial look at how the world gets Africa wrong, and how a resurgent Africa is forcing it to think again.

Africa has long been misunderstood -- and abused -- by outsiders. Correspondent Alex Perry traveled the continent for most of a decade, meeting with entrepreneurs and warlords, professors and cocaine smugglers, presidents and jihadis. Beginning with a devastating investigation into a largely unreported war crime-in 2011, when the US and the major aid agencies helped cause a famine in which 250,000 Somalis died-he finds Africa at a moment of furious self-assertion. To finally win their freedom, Africans must confront three last false prophets-Islamists, dictators and aid workers-who would keep them in their bonds.

Beautifully written, intimately reported, and sure to spark debate, The Rift passionately argues that a changing Africa revolutionizes our ideas of it, and of ourselves.

Alex Perry was born in the US and educated at Oxford University, He has worked as a foreign correspondent for two decades, covering Europe, Asia, the Middle East and Africa. During that time, he wrote more than 30 cover stories for TIME and Newsweek and covered more than 35 wars. His numerous awards include honors from the Foreign Press Association in London and the Overseas Press Club in New York.

Praise for The Rift

"An epic, rich, endlessly surprising narrative of a fast-changing Africa by one of the few Western journalists to have spent enough time there to understand it. Calls to mind the best African writing of Ryszard Kapuscinski."
—Douglas Rogers, author of The Last Resort: A Memoir of Zimbabwe

"In this stunning book about the past, present, and future of Africa, foreign correspondent Perry (who's written for Time and Newsweek) achieves the seemingly impossible: he writes about the continent from a Western perspective without trying to define Africa to the West. The stories he tells, of average Africans trying to carve out a better life, have the vividness of fiction. Candid, smart, and self-aware, this work is an impressive accomplishment that does more to give Western readers context for Africa's current condition than any book in recent memory."—Publisher's Weekly (starred review)

"Exploring modern Africa in all of its complexities...Perry's arguments about the often deleterious effects of outsiders augment some of the scholarly literature by providing a human face to usually well-intentioned but misguided interlopers. A welcome addition to our understanding of Africa."
—Kirkus Reviews

"The Rift is an immensely readable, shocking and important book. It challenges readers to think about how we relate to a changing continent, the suffering around us, and what it means to do good in the world."—Shelf Awareness