Born with Teeth: A Memoir (Hardcover) 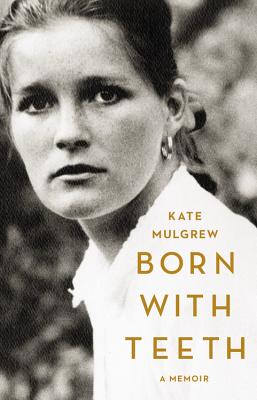 Raised by unconventional Irish Catholics who knew "how to drink, how to dance, how to talk, and how to stir up the devil," Kate Mulgrew grew up with poetry and drama in her bones. But in her mother, a would-be artist burdened by the endless arrival of new babies, young Kate saw the consequences of a dream deferred.

Determined to pursue her own no matter the cost, at 18 she left her small Midwestern town for New York, where, studying with the legendary Stella Adler, she learned the lesson that would define her as an actress: "Use it," Adler told her. Whatever disappointment, pain, or anger life throws in your path, channel it into the work.

It was a lesson she would need. At twenty-two, just as her career was taking off, she became pregnant and gave birth to a daughter. Having already signed the adoption papers, she was allowed only a fleeting glimpse of her child. As her star continued to rise, her life became increasingly demanding and fulfilling, a whirlwind of passionate love affairs, life-saving friendships, and bone-crunching work. Through it all, Mulgrew remained haunted by the loss of her daughter, until, two decades later, she found the courage to face the past and step into the most challenging role of her life, both on and off screen.

We know Kate Mulgrew for the strong women she's played -- Captain Janeway on Star Trek ; the tough-as-nails "Red" on Orange is the New Black. Now, we meet the most inspiring and memorable character of all: herself. By turns irreverent and soulful, laugh-out-loud funny and heart-piercingly sad, Born with Teeth is the breathtaking memoir of a woman who dares to live life to the fullest, on her own terms.

Kate Mulgrew is an American actress noted for her roles as Captain Kathryn Janeway on Star Trek: Voyager, Mary Ryan on Ryan's Hope, and, most recently, Galina "Red" Reznikov on Orange Is the New Black. She has performed in numerous television shows, theater productions, and movies. She is the winner of a Golden Satellite Award, a Saturn Award, and an Obie Award and has been nominated for a Golden Globe and an Emmy.

A "gem of a memoir...readers will savor Mulgew's gift for erudite, honest writing and want to read more about her mesmerizing life."
—Publishers Weekly

"[Kate's] voice is engaging and funny...Reading about her life, which contains real trauma as well as success, is like being told stories by a good friend over drinks. She takes you behind the scenes on-stage and off, and it's a fascinating journey."
—Jenn Northington, BookRiot

"Written with a marvelous flair for anecdote and detail" and a "candid, jaunty, pinch-of-sarcasm verbiage."
—Joe McGovern, Entertainment Weekly

"Mulgrew swaggers endearingly across its pages, her 'able and hardy constitution' ever on display as she powers through the many challenges--both personal and professional--that life has tossed her way. Eloquent and impassioned, the book reaches beyond the standard Hollywood memoir to something more affecting and enduring...Throughout, she narrates with the grandeur of a stage diva holding court: 'Actresses. What a bunch of sad saps, we are,' she intones. 'Madly in love with the child. Madly in love with the craft. Trying desperately to forge an alliance with the two, and constantly failing.' Mulgrew can be proud that this memoir, her defining monologue, proves otherwise."
—Nora Krug, Washington Post

"A powerful, beautifully written piece of work."
—The Chicago Tribune

"Stunningly candid about everything from the search for her daughter to aging in Hollywood, the actress...brings it all in her arresting new memoir."
—Mary Green, People

"Mulgrew has a big story to tell--several stories, actually--and she tells it with a straightforward lyricism that made me think immediately of Patti Smith's Just Kids and Frank McCourt's Angela's Ashes. It's that good."
—Joanna Connors, The Cleveland Plain Dealer

"She has formidable literary skill herself, as she makes clear from the first page of her book (I defy anyone not to fall for her from the first lines)."
—Cahir O'Doherty, The Irish Voice

"Born with Teeth jumps spectacularly from tale to trial, each approached with abandon and honesty. Reading it feels like joining a friend on a spontaneous adventure that extends to another day, another party, another trip, leaving you breathless and unable to do anything but follow."—Christine Thomas, The Miami Herald

"Richly descriptive and relatable, the book will make you a fan of Mulgrew."
—Marisa Spyker, Coastal Living