Death Will Have Your Eyes: A Novel about Spies (Paperback) 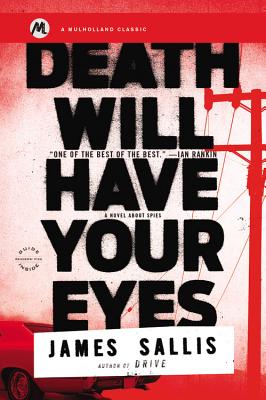 Mulholland Books takes pleasure in restoring to print an acclaimed novel of espionage and suspense by the author of Drive.

David (as he's currently known) was a member of an elite corps of spies trained during the coldest days of the Cold War. For almost a decade he has been out of the game, working as a sculptor. Then a phone call in the middle of the night awakens him: the only other survivor from that elite corps has gone rogue. David is tasked with stopping him.

What ensues is an existential cat-and-mouse game played out across the American landscape, through the diners and motels that dot the terrain like green plastic houses on a Monopoly board. Both a suspenseful novel of pursuit and a thematically rich exploration of the mind of a spy, Death Will Have Your Eyes is a contemporary classic of the espionage genre.

James Sallis is a renowned poet, critic, essayist, editor, translator, musicologist, and novelist. He is best known for his Lew Griffin mysteries, which include The Long-Legged Fly, Black Hornet, and more. He is also the author of Drive, which was adapted into the acclaimed Nicholas Refn film starring Ryan Gosling. He lives in Phoenix, Arizona.

"Vivid and strange, with prose like blown glass, Death Will Have Your Eyes is somehow equal parts Borges and Trevanian's Shibumi. I was enthralled."—--Jonathan Lethem

"Sallis is a superb writer and this is his best novel yet!"—Michael Moorcock