The Killer Inside Me (Mulholland Classic) (Paperback) 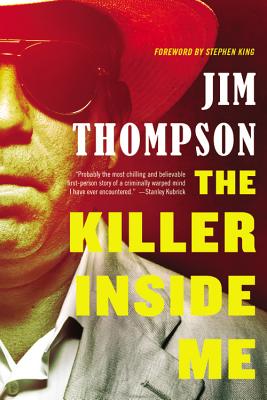 Thompson uses point of view with a dark brilliance, taking us into the mind of Lou Ford, a West Texas sheriff's deputy and psychopath. Thompson balances getting under the skin of his narrator with the society that  surrounds him for one of the most chilling books ever written.

In The Killer Inside Me, America's "Dimestore Dostoevsky" Jim Thompson goes where few novelists have dared to go, giving us a pitch-black glimpse into the mind of the American Serial Killer years before Charles Manson and Brett Easton Ellis's American Psycho, in the novel that will forever be known as the master performance of one of the greatest crime novelists of all time.

Everyone in the small town of Central City, Texas loves Lou Ford. A deputy sheriff, Lou's known to the small-time criminals, the real-estate entrepreneurs, and all of his coworkers — the low-lifes, the big-timers, and everyone in-between — as the nicest guy around. He may not be the brightest or the most interesting man in town, but nevertheless, he's the kind of officer you're happy to have keeping your streets safe. The sort of man you might even wish your daughter would end up with someday.

But behind the platitudes and glad-handing lurks a monster the likes of which few have seen. An urge that has already claimed multiple lives, and cost Lou his brother Mike, a self-sacrificing construction worker fell to his death on the job in what was anything but an accident. A murder that Lou is determined to avenge — and if innocent people have to die in the process, well, that's perfectly all right with him.

Jim Thompson was born in Anadarko, Oklahoma. He began writing fiction at a very young age, selling his first story to True Detective when he was only fourteen. Thompson eventually wrote twenty-nine novels, all but three of which were published as paperback originals.

Thompson also co-wrote two screenplays (for the Stanley Kubrick films The Killing and Paths of Glory). Several of his novels have been filmed by American and French directors, resulting in classic noir including The Killer Inside Me (1952), After Dark My Sweet (1955), and The Grifters (1963).

"If Raymond Chandler, Dashiell Hammett and Cornell Woolrich would have joined together in some ungodly union and produced a literary offspring, Jim Thompson would be it...His work...casts a dazzling light on the human condition."—Washington Post

"Like Clint Eastwood's pictures it's the stuff for rednecks, truckers, failures, psychopaths and professors ... one of the finest American writers and the most frightening, [Thompson] is on best terms with the devil. Read Jim Thompson and take a tour of hell."—The New Republic

"The most hard-boiled of all the American writers of crime fiction."—Chicago Tribune