The Doomsday Calculation: How an Equation that Predicts the Future Is Transforming Everything We Know About Life and the Universe (Paperback) 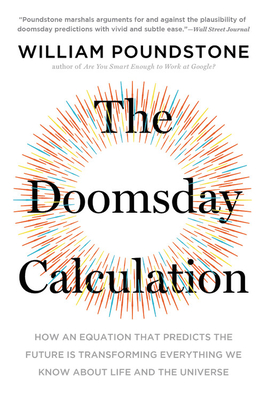 From the author of Are You Smart Enough to Work at Google?, a fascinating look at how an equation that foretells the future is transforming everything we know about life, business, and the universe.

In the 18th century, the British minister and mathematician Thomas Bayes devised a theorem that allowed him to assign probabilities to events that had never happened before. It languished in obscurity for centuries until computers came along and made it easy to crunch the numbers. Now, as the foundation of big data, Bayes' formula has become a linchpin of the digital economy.

But here's where things get really interesting: Bayes' theorem can also be used to lay odds on the existence of extraterrestrial intelligence; on whether we live in a Matrix-like counterfeit of reality; on the "many worlds" interpretation of quantum theory being correct; and on the biggest question of all: how long will humanity survive?

The Doomsday Calculation tells how Silicon Valley's profitable formula became a controversial pivot of contemporary thought. Drawing on interviews with thought leaders around the globe, it's the story of a group of intellectual mavericks who are challenging what we thought we knew about our place in the universe. The Doomsday Calculation is compelling reading for anyone interested in our culture and its future.

William Poundstone is the author of sixteen books, including Head in the Cloud, Rock Breaks Scissors, Are You Smart Enough to Work at Google?, How Would You Move Mount Fuji?, and Fortune's Formula. He has written for The Believer, The Economist, Encyclopaedia Britannica, Esquire, Harper's, Harvard Business Review, the New York Times op-ed page and Book Review, Village Voice, and many other publications. He won the 2011 Excellence in Financial Journalism Award.

"A very interesting and definitive book on this subject."—J. Richard Gott III

"One of the best science writers of our time has taken on one of the most interesting and important subjects of all time -- how to predict the future under great uncertainty. What are the odds that a nuclear weapon will detonate by accident? Is there a chance that humanity will destroy itself this century? What is the probability that aliens are out there? Will we colonize the galaxy? Are we living in a computer simulation? Is your marriage or partnership about to come to an end? These seemingly unrelated questions may be answered through one equation and a handful of principles that, when applied, may very well save humanity. A gripping read."—Michael Shermer, publisher of Skeptic magazine and author of Heavens on Earth