A Sh*tload of Crazy Powers (The Frost Files #4) (Paperback) 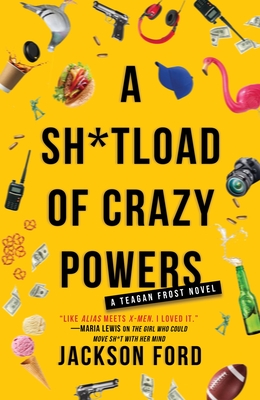 This is book number 4 in the The Frost Files series.

Telekinetic government operative Teagan Frost finds herself powerless and fighting for her life in this action-packed sci-fi adventure that will blow your tiny mind.

Teagan Frost has enough sh*t to deal with, between her job as a telekinetic government operative and a certain pair of siblings who have returned from the dead to wreak havoc with their powers. But little does she know, things are about to get even more crazy . . .

Teagan might have survived the flash flood of the century, but now she's trapped in a hotel by a bunch of gun-toting maniacs. And to make matters worse, her powers have mysteriously disappeared. Faced with certain death at every turn, Teagan will need to use every resource she has to stop a plot that could destroy Los Angeles - maybe even the entire world.

“An un-put-down-able, action-packed adventure that packs an emotional punch” (Kirkus).

For more from Jackson Ford, check out:
The Girl Who Could Move Sh*t With Her Mind
Random Sh*t Flying Through the Air
Eye of the Sh*t Storm
A Sh*tload of Crazy Powers

Jackson Ford is a pseudonym for Rob Boffard, a South African writer currently living in Vancouver. He is the author of the critically acclaimed Frost Files series, about a government operative with telekinetic powers. He has released four science fiction novels under the name Rob Boffard, and was previously a journalist for over a decade, writing articles for publications and sites including the Guardian, the BBC, Wired Magazine, and io9.

"The most intense yet . . . . Ford cranks up the volume in this entry."—Booklist on A Sh*tload of Crazy Powers

"There’s never a dull moment as Teagan and friends fly by the seat of their pants to save lives. The result will keep readers laughing and well entertained."—Publishers Weekly on A Sh*tload of Crazy Powers

"Fans who’ve been along for the ride on Teagan’s previous two outings know what to expect by now, and this third installment fully delivers, with a breakneck pace, high stakes, and plenty of wisecracks. The result is gripping, suspenseful, and thoroughly enjoyable . . . An un-put-down-able, action-packed adventure that packs an emotional punch."—Kirkus on The Eye of the Sh*t Storm

"A non-stop adrenaline high. Fans of the series will be eagerly awaiting the further adventures of Teagan and her cohorts, and newcomers will quickly fall in love with Jackson’s quirky cast of characters, imaginative storytelling, and wry wit."—Library Journal on The Eye of the Sh*t Storm

"Series fans will be pleased to see Jackson’s edgy and irreverent tone intact."—Publishers Weekly on The Eye of the Sh*t Storm

"Furious, frenetic, fun, and "f**k you": All equally valid descriptions of this book and its punk rock chef/psychic warrior protagonist. It's like the X-Men, if everybody was sick of each other's sh*t, they had to work manual labor to pay rent, and Professor X was a sociopathic government stooge. A drunken back-alley brawler of a book."—Robert Brockway, author of The Unnoticeables, on The Girl Who Could Move Sh*t With Her Mind

"Like Alias meets X-Men. I loved it."—Maria Lewis, on The Girl Who Could Move Sh*t With Her Mind

"Ford's debut holds nothing back, delivering a sense of absurd fun and high-speed thrills that more than lives up to that amazing title."—B&N Sci-Fi & Fantasy Blog, on The Girl Who Could Move Sh*t With Her Mind

"Teagan is a frank and funny narrator for this wild ride, which starts off with our heroine falling from the 82nd floor of a skyscraper and pretty much never slow down . . . . A fast-paced, high-adrenaline tale that manages to get into some dark themes without losing its sense of fun."—Kirkus, on The Girl Who Could Move Sh*t With Her Mind

"Ford's breakneck pace keeps the tension high, and the thrills coming the whole way through."—BookPage, on The Girl Who Could Move Sh*t With Her Mind

"The novel unfolds cinematically with loads of breathtaking action, a perfect candidate for film or television adaptation . . . [Readers will] want more."—Booklist, on The Girl Who Could Move Sh*t With Her Mind

"Ford's strengths are evident in the taut acton sequences and suspenseful pacing."—Publishers Weekly, on The Girl Who Could Move Sh*t With Her Mind

"The writing and storytelling is as clear and fun as the title indicates."—Locus, on The Girl Who Could Move Sh*t With Her Mind