A Touch of Jen (Paperback) 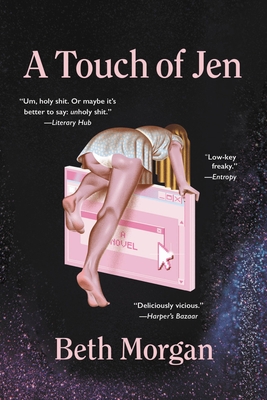 "A Touch of Jen dragged me through a rollercoaster of emotions...and the rollercoaster was otherworldly, sinister, dangerous, and so so fun! Once I was off of the coaster I wanted to get right back in line to ride it again! I laughed-cried-screamed the entire way through this book! The witty remarks and sharp humor kept me entertained and constantly screaming OMG with pure shock! I related to the characters desire to "find themselves" and discomfort with their current positions in life and was not let down by the continuing drama their actions induced! The ending left me confused and questioning-"What just happened?" There are so many great connective details throughout and this book deserves multiple readings to connect all the dots! Remy, Alicia, and Jen are like A LOT (which I so appreciate!) and also maybe aliens?"

"Um, holy shit...This novel will be the most fun you'll have this summer." —Emily Temple, Literary Hub

Remy and Alicia, a couple of insecure  service workers, are not particularly happy together. But they are bound by a shared obsession with Jen, a beautiful former co-worker of Remy’s who now seems to be following her bliss as a globe-trotting jewelry designer. In and outside the bedroom, Remy and Alicia's entire relationship revolves around fantasies of Jen, whose every Instagram caption, outfit, and new age mantra they know by heart.

Imagine their confused excitement when they run into Jen, in the flesh, and she invites them on a surfing trip to the Hamptons with her wealthy boyfriend and their group. Once there, Remy and Alicia try (a little too hard) to fit into Jen’s exalted social circle, but violent desire and class resentment bubble beneath the surface of this beachside paradise, threatening to erupt. As small disturbances escalate into outright horror, we find ourselves tumbling with Remy and Alicia into an uncanny alternate reality, one shaped by their most unspeakable, deviant, and intoxicating fantasies.  Is this what “self-actualization” looks like?

Part millennial social comedy, part psychedelic horror, and all wildly entertaining, A Touch of Jen is a sly, unflinching examination of the hidden drives that lurk just outside the frame of our carefully curated selves.

Beth Morgan grew up outside Sherman, Texas and studied writing as an undergraduate at Sarah Lawrence College. She is currently completing an MFA at Brooklyn College. Her work has been published in The Iowa Review and The Kenyon Review Online.

“A satirical, ferocious, shape-shifting novel…What started as an acerbic millennial sex comedy grows the gnashing mandibles of supernatural horror with a spiritual self-help twist…The structure is unconventional and disorienting, but Morgan manages each breakneck turn without spinning out of control. There’s an almost fanatically concrete simplicity to her prose that makes the storytelling absurd and unnerving and consistent in effect — like someone smiling at you without blinking, showing too much of the whites of her eyes…chimeric and deliriously original, emitting an eerie power.”—NEW YORK TIMES BOOK REVIEW

“Morgan has created a fabulous monster here, legitimately Frankensteined herself a wicked, unflinching, dynamite novel out of razor-sharp dialogue, toxic social media culture, and the nonsense notion that the self is just another brand to be endlessly plumbed for content. Wildly hilarious and absolutely terrifying, A Touch of Jen is truly a touch of genius. I loved every minute of it.”
—Kristen Arnett, New York Times bestselling author of WITH TEETH and MOSTLY DEAD THINGS

"A Touch of Jen is hipster noir, acerbic social parable and slasher gore-fest: as if Patricia Highsmith, Chris Kraus, and Ann Quin all crashed a Hamptons beach party, and John Carpenter dropped in with some weed."—Tom McCarthy, author of REMAINDER and SATIN ISLAND

"The funniest (and most twisted) book of the year."—Tony Tulathimutte, author of PRIVATE CITIZENS

“Morgan's got swagger. A Touch of Jen will draw you in with its electric rhythm and razor-sharp wit, but it will make you stay with its wild, beating heart. I came for the blood-thirsty monsters, I left moved by Morgan's deep understanding of the day-to-day absurdity and pain of 21st century existence. A banger of a debut and the arrival of a bold new voice in fiction.”
—Jean Kyoung Frazier, author of PIZZA GIRL

“Um, holy shit. Or maybe it’s better to say: unholy shit. Whether you’re on a post-vaccine rampage or not, this novel will be the most fun you’ll have this summer: a millennial comedy of manners that, just at the point where these things usually fizzle and disappoint, takes A Turn and morphs into a weird horror novel… I don’t want to tell you any more, so look, just trust me on this one.”—Emily Temple, LITERARY HUB

“Morgan masterfully brings dark comedy and psychedelic horror together at a slow-burning pace. Her mundane but over-the-top characters and brilliant dialogue add to the surreal and fantastical tone of this spellbinding book.”—BOOKLIST

“An ambitious debut which captures the loneliness of the internet age in deft strokes.”—KIRKUS REVIEWS

“This deliciously vicious novel, Beth Morgan’s debut, is probably best described as what might happen if Ingrid Goes West took place atop the Hellmouth of Sunnydale. The one bright spot in Remy and Alicia’s faded relationship is their mutual obsession with Jen, a beautiful former coworker-turned-influencer. When they encounter Jen in real life and get whisked into her orbit, what seems like a dream come true gradually turns into a psychedelic nightmare.”—HARPER'S BAZAAR, Best Books of Summer

“If a cross between Sally Rooney’s books and The Talented Mr. Ripley sounds intriguing to you, look out for this debut novel…supernatural and very funny and spooky and weird.”—BOSTON.COM

“Morgan drops plenty of zany twists into readers’ laps, and the latter part of the novel takes on a speculative dimension”—NEW YORK TIMES (Books to Look Out For in July)

"a twisted, brutal, and legitimately frightening tale of a parasocial relationship so toxic, it has interdimensional consequences. Reading this made me so happy I don’t have an Instagram."—Layla Halabian, NYLON MAGAZINE

“A thrillingly acerbic fable, and the perfect novel to pick up the next time you feel vaguely ill after spending too long on Instagram.”—WIRED, Best Summer Reads

“A bold, wild ride that takes our collective dependence on social media head on.”
—POPSUGAR, Best Books of the Summer

—BUSTLE, Most Anticipated Books of Summer

“darker and more ironic than other entries in the genre…Morgan suggests that authenticity can be just as hideous as its opposite….it succeeds where similar works have faltered by deflating the fantasy of the real. The fear of living dishonestly, it appears, has made it easier than ever to justify sacrificing others on the altar of our own self-actualization.”—THE NEW REPUBLIC

“Gripping…A novel about how Instagram leaks into our lives, changing and shaping how we inhabit our selves…Morgan’s narrative develops a darkly spiraling pace, simultaneously exposing and blurring the distinction between fantasy and reality…an exploration of how contemporary culture has made self-actualizing structuralists of us all.”
—ELECTRIC LITERATURE

“I quickly became addicted to this sharp, upsetting novel … A Touch of Jen explores the gulf between aspirational content and real life, with notes of both hyperrealism and a psychological thriller.
—GLAMOUR, Best Books of Summer