My Life on the Road (Paperback) 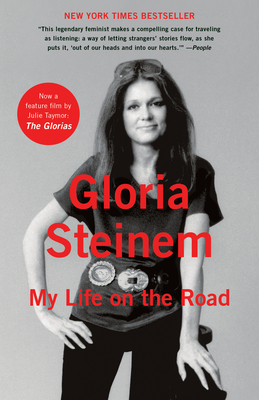 Gloria Steinem—writer, activist, organizer, and inspiring leader—now tells a story she has never told before, a candid account of her life as a traveler, a listener, and a catalyst for change. Includes “Secrets,” a new chapter!

When people ask me why I still have hope and energy after all these years, I always say: Because I travel. Taking to the road—by which I mean letting the road take you—changed who I thought I was. The road is messy in the way that real life is messy. It leads us out of denial and into reality, out of theory and into practice, out of caution and into action, out of statistics and into stories—in short, out of our heads and into our hearts.

Gloria Steinem had an itinerant childhood. When she was a young girl, her father would pack the family in the car every fall and drive across country searching for adventure and trying to make a living. The seeds were planted: Gloria realized that growing up didn’t have to mean settling down. And so began a lifetime of travel, of activism and leadership, of listening to people whose voices and ideas would inspire change and revolution.

My Life on the Road is the moving, funny, and profound story of Gloria’s growth and also the growth of a revolutionary movement for equality—and the story of how surprising encounters on the road shaped both. From her first experience of social activism among women in India to her work as a journalist in the 1960s; from the whirlwind of political campaigns to the founding of Ms. magazine; from the historic 1977 National Women’s Conference to her travels through Indian Country—a lifetime spent on the road allowed Gloria to listen and connect deeply with people, to understand that context is everything, and to become part of a movement that would change the world.

In prose that is revealing and rich, Gloria reminds us that living in an open, observant, and “on the road” state of mind can make a difference in how we learn, what we do, and how we understand each other.

Praise for My Life on the Road

“A lyrical meditation on restlessness and the quest for equity . . . Part of the appeal of My Life is how Steinem, with evocative, melodic prose, conveys the air of discovery and wonder she felt during so many of her journeys. . . . The lessons imparted in Life on the Road offer more than a reminiscence. They are a beacon of hope for the future.”—USA Today

“A warmly companionable look back at nearly five decades as itinerant feminist organizer and standard-bearer. If you’ve ever wondered what it might be like to sit down with Ms. Steinem for a casual dinner, this disarmingly intimate book gives a pretty good idea, mixing hard-won pragmatic lessons with more inspirational insights.”—The New York Times

“Steinem rocks. My Life on the Road abounds with fresh insights and is as populist as can be.”—The Boston Globe

“In person and in her writing, Steinem exudes a rare combination of calm, humility and honesty about her weaknesses that explains all she has accomplished.”—Jezebel