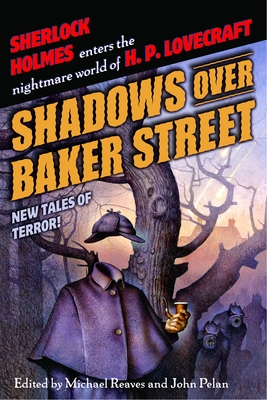 By Michael Reaves (Editor), John Pelan (Editor), Neil Gaiman, Steven-Elliot Altman, Brian Stableford
$17.00
Backordered. Place an order and we will let you know when to expect your book.

Arthur Conan Doyle’s Sherlock Holmes is among the most famous literary figures of all time. For more than a hundred years, his adventures have stood as imperishable monuments to the ability of human reason to penetrate every mystery, solve every puzzle, and punish every crime.

For nearly as long, the macabre tales of H. P. Lovecraft have haunted readers with their nightmarish glimpses into realms of cosmic chaos and undying evil. But what would happen if Conan Doyle’s peerless detective and his allies were to find themselves faced with mysteries whose solutions lay not only beyond the grasp of logic, but of sanity itself?

In this collection of all-new, all-original tales, twenty of today’s most cutting-edge writers provide their answers to that burning question.

“A Study in Emerald” by Neil Gaiman: A gruesome murder exposes a plot against the Crown, a seditious conspiracy so cunningly wrought that only one man in all London could have planned it—and only one man can hope to stop it.

“A Case of Royal Blood” by Steven-Elliot Altman: Sherlock Holmes and H. G. Wells join forces to protect a princess stalked by a ghost—or perhaps something far worse than a ghost.

“Art in the Blood” by Brian Stableford: One man’s horrific affliction leads Sherlock Holmes to an ancient curse that threatens to awaken the crawling chaos slumbering in the blood of all humankind.

“The Curious Case of Miss Violet Stone” by Poppy Z. Brite and David Ferguson: A girl who has not eaten in more than three years teaches Holmes and Watson that sometimes the impossible cannot be eliminated.

“The Horror of the Many Faces” by Tim Lebbon: Dr. Watson witnesses a maniacal murder in London—and recognizes the villain as none other than his friend, Mr. Sherlock Holmes.

With thirteen other dark tales of madness, horror, and deduction, a new and terrible game is afoot:

Michael Reaves is a renowned screenwriter who has written, edited, and/or produced more than three hundred teleplays for various television series, including Star Trek: The Next Generation, The Twilight Zone, Sliders, and Monsters. He was also a story editor and writer on Batman: The Animated Series, for which he won an Emmy Award for writing in 1993. He has worked for Spielberg’s DreamWorks, among other studios, and is the author of several fantasy novels and supernatural thrillers, including Hell on Earth and the New York Times bestselling Star Wars novel, Darth Maul: Shadow Hunter. Reaves lives in Los Angeles.

John Pelan is an acclaimed author whose fiction includes the Lovecraftian novella The Colour out of Darkness. He is the editor of such groundbreaking anthologies as Darkside: Horror for the Next Millennium, The Devil Is Not Mocked, and The Last Continent: New Tales of Zothique. His solo stories have appeared in publications such as The Urbanite, Gothic.net, Enigmatic Tales, and Carpe Noctem. He is the founder of the publishing house Darkside Press, and cofounder of Midnight House. He lives in Seattle.