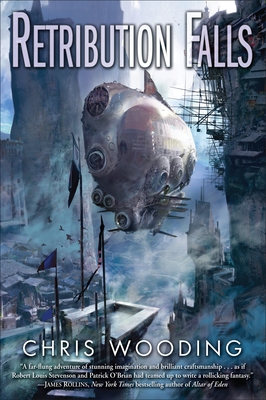 Sky piracy is a bit out of Darian Frey’s league. Fate has not been kind to the captain of the airship Ketty Jay—or his motley crew. They are all running from something. Crake is a daemonist in hiding, traveling with an armored golem and burdened by guilt. Jez is the new navigator, desperate to keep her secret from the rest of the crew. Malvery is a disgraced doctor, drinking himself to death. So when an opportunity arises to steal a chest of gems from a vulnerable airship, Frey can’t pass it up. It’s an easy take—and the payoff will finally make him a rich man.

But when the attack goes horribly wrong, Frey suddenly finds himself the most wanted man in Vardia, trailed by bounty hunters, the elite Century Knights, and the dread queen of the skies, Trinica Dracken. Frey realizes that they’ve been set up to take a fall but doesn’t know the endgame. And the ultimate answer for captain and crew may lie in the legendary hidden pirate town of Retribution Falls. That’s if they can get there without getting blown out of the sky.


"If Robert Louis Stevenson and Patrick O'Brian had teamed up to write a rollicking fantasy, Chris Wooding's Retribution Falls would be the result.  Pirates, sky-ships, and golems are just the trappings for a far-flung adventure of stunning imagination and brilliant craftsmanship.  I've already booked passage for the next flight of the Ketty Jay...long may she sail!"
--James Rollins, New York Times bestselling author of Altar of Eden


"Retribution Falls picks you up, whisks you swiftly and entertainingly along, and sets you down with a big smile on your face." –Joe Abercrombie, author of The Last Argument of Kings


"A fast exhilarating read . . . the kind of old fashioned adventure I didn’t think we were allowed to write anymore, of freebooting privateers making their haphazard way in a wondrous retro-future world." —Peter Hamilton, author of The Temporal Void


"Retribution Falls is an inventive, high-flying adventure full of secrets, sky pirates, and suspense, complete with cocky heroes and daring escapes.  Fans of Joss Whedon's Firefly will love it." –Christopher Golden, co-author of The Secret Journeys of Jack London


"Engaging characters, interesting world, a story that moves -- what more can you ask for?" –Troy Denning, New York Times bestselling author of Star Wars: Fate of the Jedi: Abyss

"If Robert Louis Stevenson and Patrick O'Brian had teamed up to write a rollicking fantasy, Chris Wooding's Retribution Falls would be the result.  Pirates, sky-ships, and golems are just the trappings for a far-flung adventure of stunning imagination and brilliant craftsmanship.  I've already booked passage for the next flight of the Ketty Jay...long may she sail!"--James Rollins, New York Times bestseller of Altar of Eden


"If masterful plotting were the book's only attribute, then Retribution Falls would still be a first-rate read. What makes it exceptional is the psychological insight rare in fast-paced, adventure SF…On every level, Retribution Falls is a triumph." –Guardian (UK)


"If any book can be given its own genre then this would surely fall under the heading of fun…and alongside Phillip Pullman’s superlative Dark Materials trilogy this is one of the best Steampunk novels out there." –Fantasy Book Review


"One of the best pieces of fun I’ve read in a long while…a whip-cracking pace and with characters you care about…If you’re looking for a book where the pages just fly in reading, then look no further - this is a great read." –SFFWorld
"So what's not to love in this book - fast action, great characters, great setting and superb one-liners? Highly, highly recommended and another notable SFF novel of 09 for me" –Fantasy Book Critic


"If you are looking for a fun, page-turning scifi read, then Retribution Falls is for you. If Joe Abercrombie ever wrote a science fiction book, this is the sort of thing he'd come up with." –Pat’s Fantasy Hotlist


"This is an exciting story and the misadventures and foolhardy escapades of this crew are extremely amusing. As in all good pirate stories, terrific battles between ships abound" –ReadPlus