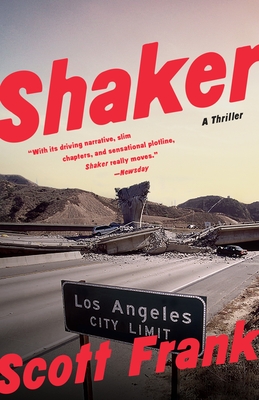 "Roy Cooper is a button man who is sent to the west coast to take out a problem, and after the job is done, Roy becomes the subject of a viral video that brings nothing but problems. Some gang bangers murder an old man in front of Roy and he is seen as a hero for standing up to them. But attention is the last thing Roy wants because soon the thugs want revenge for their embarrassment, a on-the-outs police detective wants him to answer some important questions about his being in the area of two murders, and an old colleague of Roy's, who was thought to be long dead, surfaces in order to find Roy and pay him back for a long ago wrong. In the background, politicians and people take advantage of the aftershocks to further their own agenda. Full of well developed characters, wickedly plotted and electrifying with twists and turns, this book is a fast read that is like a movie in your head."

This gripping, darkly funny debut thriller from acclaimed screenwriter Scott Frank is "an L.A. story with a little bit of [Elmore] Leonard, a little bit of Day of the Locust, and a whole lot of earthquakes” (Interview).

Roy Cooper, a stoic, unassuming “errand runner” for New York criminals, is finishing up a job in Los Angeles a week after a powerful earthquake has wreaked havoc on the city. Wandering the streets of North Hollywood while looking for his car, Roy runs into four teenage gangbangers and finds himself in the last place he wants to be: the middle of another killing. A mugging goes awry, and a passing jogger—who turns out to be a prominent mayoral candidate—dies. Roy himself is shot twice and hospitalized in critical condition. A local resident catches the whole thing on camera in a video that goes viral. And Roy, by some twist of fate, comes out looking like the hero, losing the hit man’s greatest weapon: anonymity. Roy’s newfound fame draws unlikely characters into his orbit: Kelly Maguire, a disgraced LAPD detective with an anger management problem; Science, a young gang leader who needs Roy to keep quiet about what he’s seen; Mayor Miguel Santiago, who faces accusations that he’s just had his opponent whacked; and, most chillingly, Albert Budin, a dangerous man from Roy’s past who’s just learned that his old acquaintance is still alive.

SCOTT FRANK began his career writing such films as Little Man Tate and Dead Again. His screenplay adaptation for Get Shorty was nominated for a Golden Globe Award and a Writers Guild Award for adapted screenplay. Frank’s adaptation Out of Sight received an Academy Award nomination and won a Writers Guild Award. Frank has also written the screenplays for Heaven’s Prisoners, Minority Report, The Interpreter, Marley & Me, and The Wolverine. He wrote and made his directorial debut in 2007 with The Lookout, which won the Independent Spirit Award for Best First Feature. Most recently, Frank adapted and directed A Walk Among the Tombstones. Shaker is his first novel.

“A total page-turner first novel from an award-winning screenwriter and an absolutely new voice to watch on the suspense scene.” —Library Journal (starred review)

“A gripping, strikingly original debut novel. . . . Every one of the characters, in particular the teenage gangbangers, springs to vivid and tragic life.” —Booklist

“Frank puts his career as one of the town’s best screenwriters to excellent use in his[A] sterling debut novel. . . . Shaker boasts a kind of unrestrained, manic energy reminiscent of the great Jim Thompson.” —Providence Journal