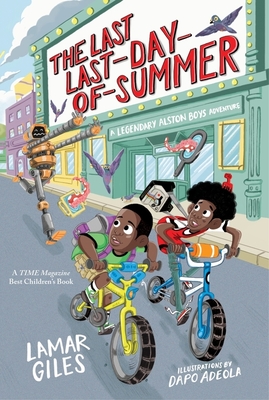 "Otto and Sheed are no strangers to bold heroics. But when the Epic Ellison Sisters (their bitter rivals) save the city again, the boys must find one last adventure to even the score before school starts in this zany mash-up of whirlwind adventure and MAD science."

"The Last Last-Day-of-Summer reminds me that all children deserve to exist in magical spaces where their imaginations and familial bonds will them into heroism. Every single child should have the freedom to be one of The Legendary Alstons. And I, for one, am grateful to Giles, and this brilliant story, for that reminder." —Jason Reynolds, #1 New York Times bestselling and Newbery Honor–winning author of Stuntboy, in the Meantime

In the first Legendary Alston Boys mystery from Edgar Award nominee Lamar Giles—now in paperback—two adventurous cousins accidentally freeze time on the last day of summer, and the secrets hidden between the seconds, minutes, and hours aren't quite the endless fun they expected!

Otto and Sheed are the local sleuths in their zany Virginia town, masters of unraveling mischief using their unmatched powers of deduction. And as the summer winds down and the first day of school looms, the boys are craving just a little bit more time for fun, even as they bicker over what kind of fun they want to have.

That is, until a mysterious man appears with a camera that literally freezes time. Now, with the help of some very strange people and even stranger creatures, Otto and Sheed will have to put aside their differences to save their town—and each other—before time stops for good.

And don't miss the Legendary Alston Boys in their next adventures: The Last Mirror on the Left and The Last Chance for Logan County!

Lamar Giles is the Edgar Award–nominated author of the Legendary Alston Boys series, as well as several young adult novels. He is the cofounder of We Need Diverse Books and the editor of the WNDB anthology, Fresh Ink. He lives in Virginia with his family.

Dapo Adeola is an award-winning illustrator and designer who creates characters and images that challenge expectations around race and gender in a fun and upbeat way. He is the co-creator and illustrator of bestselling picture book Look Up! — winner of the Waterstones Children’s Book Prize and the number 1 debut picture book of 2019. Dapo is also illustrator of the Versify fiction series The Last Last Day of Summer and other upcoming series with Macmillan and Bloomsbury.

London born and bred but of Nigerian heritage, when he’s not busy cooking up new characters and adventures you can find Dapo running illustration and character design workshops with children or organising events to help highlight the possibilities of a career in illustration to underrepresented members of the Black diaspora. Find him on Instagram and Twitter @dapodraws.

"Laced with humor, the fantastical time war plays out at a dizzying pace... with themes of reconciliation, family, identity, and destiny." — Publishers Weekly (starred review)

"A zany, clever adventure.... Anchored by its genuine characters and buoyed by its true fun." — Booklist (starred review)

"With total mastery, Giles creates in Logan County an exuberant vortex of weirdness.... Imaginative, thrill-seeking readers, this is a series to look out for." — Kirkus Reviews (starred review)

"Fills a gaping void in children’s literature.... Every child, regardless of background, deserves adventure void of trauma... deserves to exist in magical spaces... should have the freedom to be one of the Legendary Alstons. And I, for one, am grateful to Giles, and this brilliant story, for that reminder." — Jason Reynolds, #1 New York Times bestselling and Newbery Honor–winning author of Stuntboy, in the Meantime

“The legendary heroes of this legendary book are already legendary when the story begins! From there things can only get legendary-er!” — Tom Angleberger, New York Times bestselling author of the Origami Yoda series