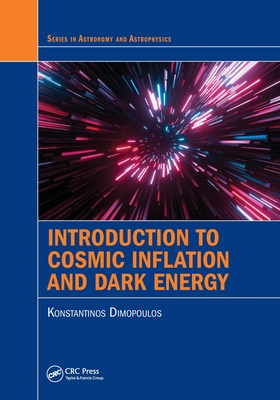 Cosmic inflation and dark energy hold the key to the origin and the eventual fate of the Universe. Despite the increasing prominence of these subjects in research and teaching over the past decade or more, no introductory textbook dedicated to these topics has been previously published. Dr. Konstantinos Dimopoulos is a highly regarded expert in the field, and an experienced communicator of the subject to students. In this book, he provides advanced undergraduate and early graduate students with an accessible introduction and equips them with the tools they need to understand the cosmology of cosmic inflation and dark energy.

Provides a concise, pedagogical crash course in big bang cosmology, focusing on the dynamics and the history of the Universe, with an emphasis on the role of dark energy Chapters contain questions and problems for readers to test their understanding The first book to make cosmic inflation and dark energy accessible to students

Konstantinos Dimopoulos, presently Reader in Physics at Lancaster University, obtained his undergraduate degree in Physics from the Aristotle University of Thessaloniki in 1992. He continued his studies in the Department of Applied Mathematics and Theoretical Physics (DAMTP) of the University of Cambridge (Darwin College), where he obtained the Certificate of Advanced Study in Mathematics in 1994 and his PhD in Particle Cosmology in 1998 under the supervision of Professor A.C. Davis. Dr. Dimopoulos had several post-doctoral appointments in the framework of EU Research Training Network Programmes, in the Instituto de Fisica Corpuscular (IFIC) in Valencia, Spain (1999-2001) and in the Physics Department of Lancaster University, Lancaster, UK (2001-2003). In 2003, he obtained a four-year Research Associate Fellowship in the Institute of Nuclear Physics of the National Centre for Scientific Research 'Demokritos' in Athens, Greece, which he interrupted in 2004 when he was offered a staff position in the Physics Department of Lancaster University. His research interests centre around the physics of the very early Universe, in particular on particle cosmology, cosmic inflation, quintessential inflation, and cosmic vector fields.