Translating the Crisis: Politics and Culture in Spain after the 15M (Critical Perspectives on Citizen Media) (Paperback) 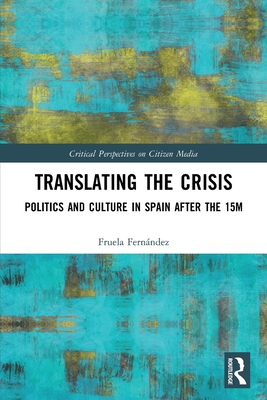 Translating the Crisis discusses the multiple translation practices that shaped the 15M movement, also known as the indignados ('outraged'), a series of mass demonstrations and occupations of squares that took place across Spain in 2011 and which played a central role in the recent global wave of popular protest. Through a study of the movement's cultural and intellectual impact, as well as some of its main political evolutions (namely Podemos and Barcelona en Com ), Fern ndez shows how translation has contributed to the dissemination of ideas and the expansion of political debates, produced new intellectual and political figures, and provided support to political projects.

Drawing on fieldwork, interviews, and a large repertoire of sources in various languages, this monograph provides an in-depth study of the role of translation in the renewal of activist language, the development of political platforms,  and the creation of new social references, while also presenting a critical perspective on its limitations and shortcomings. Combining first-hand experience of the Spanish reality with a keen transnational awareness, Fern ndez offers a nuanced, present-day perspective on the political events taking place in Spain and connects them with wider transformations across the world.

This book is invaluable for scholars and researchers in Translation Studies, Spanish Studies, Social Movement Studies, and Politics.