Identity: The Demand for Dignity and the Politics of Resentment (Hardcover) 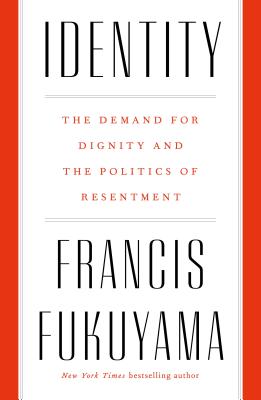 The New York Times bestselling author of The Origins of Political Order offers a provocative examination of modern identity politics: its origins, its effects, and what it means for domestic and international affairs of state

In 2014, Francis Fukuyama wrote that American institutions were in decay, as the state was progressively captured by powerful interest groups. Two years later, his predictions were borne out by the rise to power of a series of political outsiders whose economic nationalism and authoritarian tendencies threatened to destabilize the entire international order. These populist nationalists seek direct charismatic connection to “the people,” who are usually defined in narrow identity terms that offer an irresistible call to an in-group and exclude large parts of the population as a whole.

Demand for recognition of one’s identity is a master concept that unifies much of what is going on in world politics today. The universal recognition on which liberal democracy is based has been increasingly challenged by narrower forms of recognition based on nation, religion, sect, race, ethnicity, or gender, which have resulted in anti-immigrant populism, the upsurge of politicized Islam, the fractious “identity liberalism” of college campuses, and the emergence of white nationalism. Populist nationalism, said to be rooted in economic motivation, actually springs from the demand for recognition and therefore cannot simply be satisfied by economic means. The demand for identity cannot be transcended; we must begin to shape identity in a way that supports rather than undermines democracy.

Identity is an urgent and necessary book—a sharp warning that unless we forge a universal understanding of human dignity, we will doom ourselves to continuing conflict.

Francis Fukuyama is the Olivier Nomellini Senior Fellow at Stanford University's Freeman Spogli Institute for International Studies. He has previously taught at the Paul H. Nitze School of Advanced International Studies of Johns Hopkins University and at the George Mason University School of Public Policy. He was a researcher at the RAND Corporation and served as the deputy director in the State Department's policy planning staff. He is the author of The End of History and the Last Man, Trust, and America at the Crossroads: Democracy, Power, and the Neoconservative Legacy. He lives with his wife in California.

"[Identity] is in itself an indictment of the perilous times we live in today." —Arjun Neil Alim, The Standard (London)

"[Identity] is as wise as it is compact, traveling at great speed through difficult terrain to a sensible conclusion." —Daniel Finkelstein, The Times (London)

"The renowned political scientist argues persuasively, and urgently, that a desire for recognition of one's dignity is inherent in every human being—and is necessary for a thriving democracy . . . A cogent analysis of dire threats to democracy." —Kirkus

"Ambitious and provocative . . . This erudite work is likely to spark debate." —Publishers Weekly