The Electric Hotel: A Novel (Hardcover) 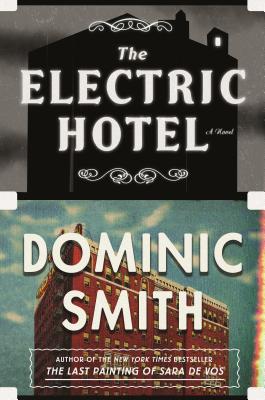 A sweeping work of historical fiction from the New York Times–bestselling author Dominic Smith, The Electric Hotel is a spellbinding story of art and love.

For more than thirty years, Claude Ballard has been living at the Hollywood Knickerbocker Hotel. A French pioneer of silent films who started out as a concession agent for the Lumière brothers, the inventors of cinema, Claude now spends his days foraging for mushrooms in the hills of Los Angeles and taking photographs of runaways and the striplings along Sunset Boulevard. But when a film history student comes to interview Claude about The Electric Hotel—the lost masterpiece that bankrupted him and ended the career of his muse, Sabine Montrose—the past comes surging back. In his run-down hotel suite, the ravages of the past are waiting to be excavated: celluloid fragments in desperate need of restoration, as well as Claude’s memories of the woman who inspired and beguiled him.

The Electric Hotel is a portrait of a man entranced by the magic of moviemaking, a luminous romance, and a whirlwind trip through early cinema. Sit back, relax, and enjoy the show.

Dominic Smith grew up in Australia and now lives in Seattle, WA. He's the author of the novels: The Last Painting of Sara de Vos, Bright and Distant Shores, The Beautiful Miscellaneous, and The Mercury Visions of Louis Daguerre. His short fiction has been nominated for a Pushcart Prize and has appeared widely, including in The Atlantic, Texas Monthly, and the Chicago Tribune's Printers Row Journal. He has been a recipient of a Literature Grant from the Australia Council for the Arts, a Dobie Paisano Fellowship, and a Michener Fellowship.

Praise for The Electric Hotel

“An irresistible and dizzying international tale of early cinema. [Smith] is a writer of elegance, rich imagination and propulsive plotting.”
—The Washington Post

“Radiant . . . a vital and highly entertaining work about the act of creation, and about what it means to pick up and move on after you’ve lost everything.”
—The New York Times

“The Electric Hotel enchants with a compelling plot but satisfies with the fully felt pathos of its characters.”
—BookPage

“Fascinating information about the making of silent films is balanced by poignant, emotional portrayals of individuals attempting to define their lives offscreen even as they made history on it. Smith winningly delves into Hollywood’s past.”
—Publishers Weekly

“Wondrous . . . [Smith] writes with an old-world elegance; you get lost in these pages like you do in a great movie, not wanting the lights to come up.”
—The Seattle Times

“A glorious ode to the luminous art that ushered in Hollywood’s film era.”
—BBC

“As fresh and deliciously strange as the first days of film-making it so dazzlingly brings to life, The Electric Hotel is utterly absorbing, astonishingly inventive, and richly imagined. Dominic Smith is a wizard.”
—Andrea Barrett, National Book Award winner and author of Archangel


Praise for The Last Painting of Sara de Vos

A Kirkus Reviews Best Book of the Year

“Gorgeous storytelling: wry, playful, and utterly alive, with an almost tactile awareness of the emotional contours of the human heart.”
—Laura Collins-Hughes, The Boston Globe