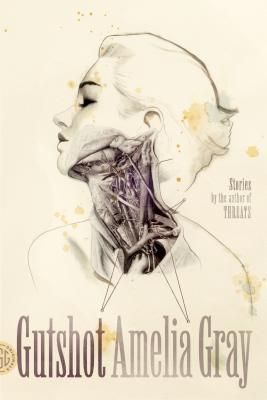 A woman creeps through the ductwork of a quiet home. A medical procedure reveals an object of worship. A carnivorous reptile divides and cauterizes a town. Amelia Gray's curio cabinet expands in Gutshot, where isolation and coupling are pushed to their dark and outrageous edges. A master of the macabre, Gray's work is not for the faint of heart or gut: lick at your own risk.

Amelia Gray is the author of several books, including AM/PM, Museum of the Weird, THREATS, and Gutshot. Her fiction and essays have appeared in The New Yorker, The New York Times, The Wall Street Journal, Tin House, and VICE. She has been a finalist for the PEN/Faulkner Award for Fiction and for the New York Public Library Young Lions Fiction Award, and is the winner of the FC2 Ronald Sukenick Innovative Fiction Contest. She lives in Los Angeles.

“Reading Gutshot is a little like being blindfolded and pelted from all sides with fire, Jell-O and the occasional live animal. You'll be messy at the end and slightly beaten up, but surprised and certainly entertained . . . She pushes against the outer limits of what humans can and will do. She seems to be testing her readers, too. Will you come with me here? How about if I take it a little further? Are you still game?” —Ramona Ausubel, The New York Times Book Review

“Amelia Gray sounds like no one else. Her writing is by turns horrifying, funny, sexy and grotesque, but woe be to those who want to pin it down as horror, comedy, romance or fantasy. Sentence by sentence, these stories are simple, rarely complicated by rhetorical flourishes or formal experimentation, but the scenes they build can be deeply complex - and the emotions they summon often contradictory, too. And, at the beating heart of it all, Gray's on a quest to reclaim the body's rightful place in literature - the clumsy, bloody, inconvenient body, which so often gets left behind in high-minded drama . . . By baring a bit of blood to the world, she reminds readers we're blood-bearing creatures after all, not just selves but bodies with beating hearts.” —Colin Dwyer, NPR

“The stories in Gutshot, also aptly named, get at you right in the viscera, full of bodily fluids and strange sights and smells. They often end not with a neat tying-up of the various elements, but as if something exploded, like dynamite breaking down a door . . . But Gutshot is not all swagger and shock-there's a softness hiding under the derangement, a visible tenderness for her troubled characters that have found themselves lost in the margins of existence, that becomes all the more affecting as it moves with and against the character's sharp edges.” —Juliet Escoria, Vice

“In Gray's (Threats, 2012) latest unique, punchy collection, she melds the inexplicable with everyday realities . . . Gray's bountiful five-part collection incorporates tales and vignettes both absorbing and unconventional . . . While eccentricities are on display, Gray's stories also deftly capture the startling moments when her characters pull off their armor and reveal their genuine selves.” —Booklist

“Strange, fable-like, and physical, Gray's stories are driven by uncanny forces and set in organic yet unnatural worlds . . . Masterly gathering of forces [are] at the heart of the collection: black humor brushes up against abject tragedy, desperation and abuse, longing loneliness, and even hopeful peace. Gray dazzlingly renders the wide array of human experience in these potent, haunting stories.
” —Publishers Weekly

“The minute details of life are memorably rendered in surreal and sometimes grotesque ways . . . [Gray] takes familiar elements and pushes them toward an eerie, transgressive place . . . This is Gray's fourth book (and third story collection), and it features the widest stylistic range of any of her books to date. . . Grim, bittersweet . . . comic . . . and emotionally harrowing. The best of Gray's stories find that balance between devastation and humor and navigate an uneasy territory with agility.
” —Kirkus Review

“Gutshot is a wild journey through the singular imagination of Amelia Gray, one of the most ambitious and relentlessly inventive writers of our time. The worlds Gray conjures are gorgeous and gruesome and devastating and stone-cold hilarious-but more than anything, these stories are as fearless and original as they come.” —Laura van den Berg, author of Find Me

“Gutshot is a nightmare in the best way. Every story is visceral, fearless, and painfully true. ” —Catherine Lacey, author of Nobody Is Ever Missing

“Exhilarating and violently creative, these stories are an assault on expectation. Gutshot is a rare, new original, and Amelia Gray is her own startling genre. This is a book to be experienced, to be taught and
obsessed over, to live as a prized weapon on your bookshelf.” —Alissa Nutting, author of Tampa

“Amelia Gray's writing makes you feel like you've been shot out of a cannon. You're disoriented, stunned, completely overcome . . . but you're also flying through the air. Get ready. Gutshot is a book of lit matches.” —Lindsay Hunter, author of Ugly Girls

“Call them what you must-stories, fables, parables, nanonovels of melancholized hilarity-but Amelia Gray's super-concentrated, hyper-velocitous prose marvelments do what so few fictions even attempt: leave you gasping from one unsettling sentence to the next. Have our clammiest moments and the squishes, the squirms, of our unthriving, unsightly bodies ever been rendered with such tender and generous genius? Gutshot has the delirious feel of a heart-shaker of a book that has been waiting forever to get itself written and, lucky for us, has finally fetched up stickingly on the page.” —Gary Lutz, author of Stories in the Worst Way