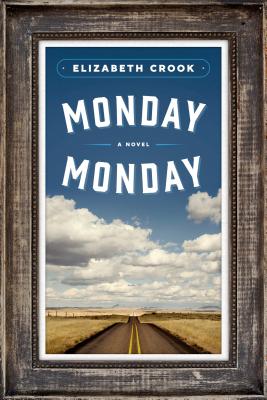 By Elizabeth Crook
Unavailable. Orders will be auto-cancelled.

In this gripping, emotionally charged novel, a tragedy in Texas changes the course of three lives
On an oppressively hot Monday in August of 1966, a student and former marine named Charles Whitman hauled a footlocker of guns to the top of the University of Texas tower and began firing on pedestrians below. Before it was over, sixteen people had been killed and thirty-two wounded. It was the first mass shooting of civilians on a campus in American history.

Monday, Monday follows three students caught up in the massacre: Shelly, who leaves her math class and walks directly into the path of the bullets, and two cousins, Wyatt and Jack, who heroically rush from their classrooms to help the victims. On this searing day, a relationship begins that will eventually entangle these three young people in a forbidden love affair, an illicit pregnancy, and a vow of secrecy that will span forty years. Reunited decades after the tragedy, they will be forced to confront the event that changed their lives and that has silently and persistently ruled the lives of their children.

With electrifying storytelling and powerful sense of destiny, Elizabeth Crook's Monday, Monday explores the ways in which we sustain ourselves and one another when the unthinkable happens. At its core, it is the story of a woman determined to make peace with herself, with the people she loves, and with a history that will not let her go. A humane treatment of a national tragedy, it marks a generous and thrilling new direction for a gifted American writer.

Elizabeth Crook's novel The Night Journal won a Spur Award from Western Writers of America and a WILLA Literary Award from Women Writing the West. She has written for magazines and periodicals, including Texas Monthly and the Southwestern Historical Quarterly. She lives in Austin with her family.

“This is a vivid portrayal of resolve in the face of great tragedy.” —Booklist

“. . . this book, recast as a novel about a mass murder 48 years ago this summer, may help explain the mindsets of surviving victims from Columbine, Virginia Tech, Sandy Hook and the like.” —The Buffalo News

“Framing a story in the context of calamity--in this instance, mass murder--invites both sensationalism and sentimentality; there have been few memorable successes, Jonathan Safran Foer's Extremely Loud and Incredibly Close and Wally Lamb's The Hour I First Believed among them. Add Crook's latest to the plus side of the list….confident and lyrical as it smartly engages terror and its aftermath.” —Kirkus (starred review)

“[Monday, Monday] is rich in detail and grand in scope. . . the emotional journey shown in the novel remains honest, and deeply human.” —Bustle

“Love, loss, redemption, forgiveness--all are expertly drawn in a narrative that is so very authentic and generous. Crook skillfully weaves together several compelling stories through her close attention to the Texas setting. VERDICT The sensitively explored themes of adoption and coping with violence should create interest in this rich and satisfying tale.” —Library Journal

“The tale unwinds like an examination of the ripple effect. . . As readers, we have the benefit of sitting in the sand and watching them break on the shoreline. . . This story is the antithesis to the diagram published in the pages of Time magazine shortly after the shooting. Crook forsakes the aerial view and brings your cheek right on down to the scalding pavement.” —Austin Chronicle

“[E]loquent. . . Monday, Monday opens with a random, hideous act, but thankfully the novel isn't about that moment or the gunman. The shooting sets in motion an entire lifetime of relationships; from an act of violence springs love, friendship, loss, forgiveness and survival. . . Crook's writing shimmers with life. . . a gorgeous, worthy and entirely believable read.” —San Antonio Express-News

“[An] intensely imagined novel. . . The story unfurls simply and smoothly, with a quiet insistence much like the path the characters will take. Crook renders Shelly's interior life delicately and fully, and artfully conveys her many moments of panic and anguish.” —Publishers Weekly

“Authentic. . . harrowing. . . makes us believe the characters were there. . . Crook's exploration of Whitman's massacre and its lingering effects will have relevance for years to come.” —Dallas Morning News

“Beautifully written. . . The book is a complex tale about overcoming fear and the risks and power of love. . . And it is the story of the compromises we all make to get by in this imperfect world. Part of what makes this book so compelling is the open and tender way each character is honestly but lovingly portrayed. . . A wonderful book that will make you cry, but also uplift you.” —BookPage

“This rapturous novel starts with one of the most heinous shootings in history, yet every page shines with life. Crook follows three students who endured the tragedy as they grapple with the past, struggle to navigate their futures, and discover that who and what saves us is nothing like what you imagine. Brilliantly realized and so vivid the novel seems to virtually breathe, Monday, Monday is a stunning achievement.” —Caroline Leavitt, New York Times bestselling author of Is This Tomorrow and Pictures of You

“Elizabeth Crook has written an extraordinary novel--an eloquent love story born from an act of random violence, a tale of destruction and redemption. It's about making a whole life out of a damaged one, and about holding on and letting go. The characters are as real as people you know; their story is subtle, startling, and wise.” —SARAH BIRD, author of The Yokota Officers Club and Above the East China Sea

“In Monday, Monday, Elizabeth Crook uses vivid, gripping prose and in-depth historical research to shed light on one of the darkest moments in Texas history... by detailing the fictional lives of three survivors caught in the crosshairs.” —The Rivard Report

“Monday, Monday begins by throwing us into the midst of one of the worst mass murders in American history, a scene painted with such harrowing exactitude that it leaves you wondering how the characters can possibly survive and how the author can possibly sustain such a high level of narrative momentum and emotional insight. And yet Elizabeth Crook pulls it off. This is a brilliant and beautiful book.” —STEPHEN HARRIGAN, author of The Gates of the Alamo and Remember Ben Clayton