From the Ruins of Empire: The Intellectuals Who Remade Asia (Hardcover) 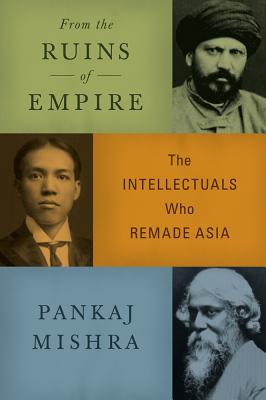 By Pankaj Mishra
Unavailable. Orders will be auto-cancelled.

A little more than a century ago, as the Japanese navy annihilated the giant Russian one at the Battle of Tsushima, original thinkers across Asia, working independently, sought to frame a distinctly Asian intellectual tradition that would inform and inspire the continent's anticipated rise to dominance.

Asian dominance did not come to pass, and those thinkers—Tagore, Gandhi, and later Nehru in India; Liang Qichao and Sun Yatsen in China; Jamal al-Din al-Afghani and Abdurreshi al Ibrahim in the ruins of the Ottoman Empire—are seen as outriders from the main anticolonial tradition. But Pankaj Mishra shows that it was otherwise in this stereotype-shattering book. His enthralling group portrait of like minds scattered across a vast continent makes clear that modern Asia's revolt against the West is not the one led by faith-fired terrorists and thwarted peasants but one with deep roots in the work of thinkers who devised a view of life that was neither modern nor antimodern, neither colonialist nor anticolonialist. In broad, deep, dramatic chapters, Mishra tells the stories of these figures, unpacks their philosophies, and reveals their shared goal of a greater Asia.

Right now, when the emergence of a greater Asia seems possible as at no previous time in history, From the Ruins of Empire is as necessary as it is timely—a book essential to our understanding of the world and our place in it.

Pankaj Mishra was born in northwest India in 1969 and lives in London and Mashobra, India. The author of An End to Suffering (FSG, 2004) and Temptations of the West (FSG, 2006), as well as a novel, The Romantics, he writes for The New Yorker, The New York Review of Books, The New York Times Book Review, and The Guardian.

“History is sometimes a contest of narratives. Here Pankaj Mishra looks back on the 19th and 20th centuries through the work of three Asian thinkers: Jamal al-Din Afghani, Liang Qichao and Rabindranath Tagore. The story that emerges is quite different from that which most Western readers have come to accept. Enormously ambitious but thoroughly readable, this book is essential reading for everyone who is interested in the processes of change that have led to the emergence of today's Asia.” —Amitav Ghosh, author of Sea of Poppies and River of Smoke

“With uncommon empathy, Mishra has excavated a range of ideas, existential debates, and spiritual struggles set in motion by Asia's rude collision with the West, leading to outcomes no one could have predicted but which, after his account, seem more comprehensible--and that is no mean achievement. Above all, Mishra sheds new light on an important part of our collective journey, the inner and outer turmoil we inhabited, the price we paid, and what we did to each other along the way. We might yet learn from it and redeem ourselves in some measure.” —Namit Arora, 3 Quarks Daily

“After Edward Said's masterpiece Orientalism, From the Ruins of Empire offers another bracing view of the history of the modern world. Pankaj Mishra, a brilliant author of wide learning, takes us through, with his skillful and captivating narration, interlinked historical events across Japan, China, Turkey, Iran, India, Egypt, and Vietnam, opening up a fresh dialogue with and between such major Asian reformers, intellectuals, and revolutionaries as Liang Qichao, Tagore, Jamal al-din al-Afghani, and Sun Yatsen.” —Wang Hui, author of China's New Order and The Rise of Modern Chinese Thought and Professor of Chinese Intellectual History at Tsinghua University, Beijing

“Pankaj Mishra has produced a riveting account that makes new and illuminating connections. He follows the intellectual trail of this contested history with both intelligence and moral clarity. In the end we realise that what we are holding in our hands is not only a deeply entertaining and deeply humane book, but a balance sheet of the nature and mentality of colonisation.” —Hisham Matar

“Subtle, erudite and entertaining.” —The Economist

“Meticulous scholarship…..History, as Mishra insists, has been glossed and distorted by the conqueror….[This] passionate account of the relentless subjugation of Asian empires by European, especially British, imperialism, is provocative, shaming and convincing.” —Michael Binyon, Times (London)

“One can only be thankful for writers like Mishra. From The Ruins Of Empire is erudite, provocative, inspiring and unremittingly complex; a model kind of non-fiction for our disordered days….May well be seen in years to come as a defining volume of its kind.” —Stuart Kelly, Scotsman

“Deeply researched and arrestingly original…this penetrating and disquieting book should be on the reading list of anybody who wants to understand where we are today.” —John Gray, Independent

“Lively…Engaging…From the Ruins of Empire retains the power to instruct and even to shock. It provides us with an exciting glimpse of the vast and still largely unexplored terrain of anti-colonial thought that shaped so much of the post-western world in which we now live.” —Mark Mazower, Financial Times

“Superb and ground-breaking. Not just a brilliant history of Asia, but a vital history for Asians.” —Mohsin Hamid

“Mishra has no time at all for big, broad-brush accounts of western success contrasted with eastern hopelessness. Instead, he is preoccupied by the tragic moral ambivalence of his tale. . . From the Ruins of Empire gives eloquent voice to their curious, complex intellectual odysseys as they struggled to respond to the western challenge . . . Luminous details glimmer through these swaths of political and military history.” —Julia Lovell, The Guardian

“[An] ambitious survey of the decline and fall of Western colonial empires and the rise of their successors. . . A highly readable and illuminating exploration of the way in which Asian, and Muslim countries in particular, have resented Western dominance and reacted against it with varying degrees of success.” —The Tablet (UK)

“From the Ruins of Empire jolts our historical imagination and suddenly places it on the right, though deeply repressed, axis. It is a book of vast and wondrous learning and delightful and surprising associations that will give a new meaning to a liberation geography. From close and careful readings of some mighty Asian intellectuals of the last two centuries who have rarely been placed in this creative and daring conversation with each other, Pankaj Mishra has discovered and revealed, against the grain of conventional and cliched bifurcations of 'The West and the Rest,' a continental shift in our historical consciousness that will define a whole new spectrum of critical thinking.” —Hamid Dabashi, Columbia University

“In his brilliant new book Pankaj Mishra reverses the long gaze of the West upon the East, showing modern history as it has been felt by the majority of the world's population from Turkey to China. These are the amazing stories of the grandfathers of today's angry Asians. Excellent!” —Orhan Pamuk