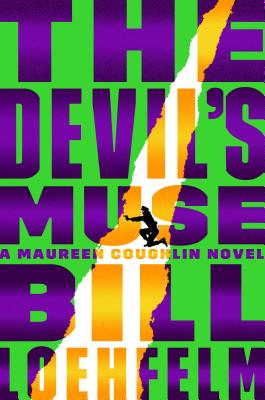 By Bill Loehfelm
Unavailable. Orders will be auto-cancelled.

This is book number 5 in the Maureen Coughlin Series series.

A Southern Indie Bookseller Alliance 2017 Summer OKRA pick!
One of Kirkus Review’s “11 Thrillers That Will Keep You Awake This Summer”
Watch the trailer for The Devil's Muse here: https://vimeo.com/224000865

It’s Mardi Gras in New Orleans and rookie cop Maureen Coughlin has no idea what she’s in for. Her night working the parades begins calmly enough—until a half-naked man careens through the crowd and throws himself onto the hood of an oncoming SUV. As she tries to deal with the incident amid the pulsing chaos of the parade, Maureen hears gunshots. Moments later, with three wounded and a handful of drunken witnesses, Maureen has a full-fledged investigation on her hands. Who was the shooter? Who was he after? Who’s the next target? City bigwigs begin pressuring Maureen and her crew for quick answers. And with an amateur camera crew intent on capturing “the real Mardi Gras” for their YouTube channel, an incompetent supervising detective, and tense race relations in a city more likely to mistrust cops than ever, it’s going to be a very long night—and a memorable first Mardi Gras—for Maureen.

With The Devil’s Muse, the acclaimed crime writer Bill Loehfelm conjures rowdy New Orleans in all its mess and marvel, and sends Maureen deep into the city on another wild, high-octane adventure.

Bill Loehfelm is the author of the critically acclaimed series about the New Orleans Police Department rookie Maureen Coughlin, as well as the stand-alone novels Fresh Kills and Bloodroot. His short fiction and nonfiction have appeared in several anthologies. He lives in New Orleans with his wife, AC Lambeth, a writer and yoga instructor, and their dog. He plays drums in a rock-’n’-roll band.

"An unforgettable parade and all the action you could ever want.” —Susan Larson, WWNO

"Loehfelm simmers the various tensions—racial, police versus civilians, power struggles with the NOPD—like the finest of cooks stirring a pot of gumbo with a bomb in it . . . Loehfelm doesn't need showy murders or gory scenes to writes crime stories with grit that stay lodged in your brain and get under your skin in the best possible way." —Kirkus (starred review)

"Loehfelm conducts a master class in how a writer builds character from the smallest of details. Coughlin remains the star here—she’s still one of the most compelling figures in crime fiction—but this time, the focus is on cops working together; it’s a procedural in the best sense of the word, and it evokes Ed McBain at the top of his game." —Bill Ott, Booklist (starred review)

"The fifth installment in this award-winning series is another riveting procedural. Setting, plot, and character are the essential components in this tough, smart crime novel, which effectively ramps up the tension and ties the disparate pieces together into a satisfying whole." —Library Journal