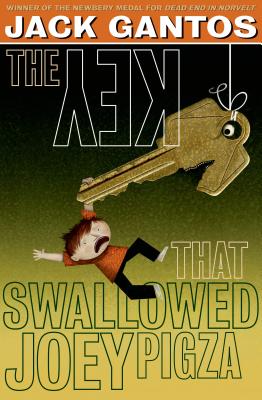 This is book number 5 in the Joey Pigza series.

The fifth and final book in the groundbreaking Joey Pigza series brings the beloved chronicle of this wired, wacky, and wonderful boy to a crescendo of chaos and craziness, as everything goes topsy-turvy for Joey just as he starts to get his feet on the ground. With his dad MIA in the wake of appearance-altering plastic surgery, Joey must give up school to look after his new baby brother and fill in for his mom, who hospitalizes herself to deal with a bad case of postpartum blues. As his challenges mount, Joey discovers a key that could unlock the secrets to his father's whereabouts, a mystery that must be solved before Joey can even hope that his broken family might somehow come back together—if only it doesn't pull him apart first.

Jack Gantos has written books for people of all ages, from picture books and middle-grade fiction to novels for young adults and adults. His works include Hole in My Life, a memoir that won the Michael L. Printz and Robert F. Sibert Honors, Joey Pigza Swallowed the Key, a National Book Award Finalist, and Joey Pigza Loses Control, a Newbery Honor book. Jack was born in Mount Pleasant, Pennsylvania, and when he was seven, his family moved to Barbados. He attended British schools, where there was much emphasis on reading and writing, and teachers made learning a lot of fun. When the family moved to south Florida, he found his new classmates uninterested in their studies, and his teachers spent most of their time disciplining students. Jack retreated to an abandoned bookmobile (three flat tires and empty of books) parked out behind the sandy ball field, and read for most of the day. The seeds for Jack’s writing career were planted in sixth grade, when he read his sister’s diary and decided he could write better than she could. He begged his mother for a diary and began to collect anecdotes he overheard at school, mostly from standing outside the teachers’ lounge and listening to their lunchtime conversations. Later, he incorporated many of these anecdotes into stories.  While in college, he and an illustrator friend, Nicole Rubel, began working on picture books. After a series of well-deserved rejections, they published their first book, Rotten Ralph, in 1976. It was a success and the beginning of Jack’s career as a professional writer. Jack continued to write children’s books and began to teach courses in children’s book writing and children’s literature. He developed the master’s degree program in children’s book writing at Emerson College and the Vermont College M.F.A. program for children’s book writers. He now devotes his time to writing books and educational speaking. He lives with his family in Boston, Massachusetts.

“Even kids whose own experience is more orthodox will recognize that this conclusion counts as success for the Pigzas and a triumphant coming into his own for Joey, the boy whose unstoppable energy has become a force for good. Fans who've followed Joey's chronicles will regret the series' ending, but the inimitable Joey will live on indelibly in memory and in new generations reading.” —BCCB

“* Readers of all ages are going to cheer Joey on as he heroically deals with one over-the-top situation after another. By the time this final book of the series - as elegantly and propulsively written as the others - draws to a close, you know that no matter what the future holds, Joey's inner strength and smart, sweet nature will prevail.” —The Horn Book, STARRED REVIEW

“* Readers who have read the previous books and come to know and love Joey will appreciate the irony and emotional punch of his final triumph. Give this groundbreaking, heartbreaking title to readers mature and sensitive enough to understand the author's black humor and seriousness.” —School Library Journal, STARRED REVIEW

“* The fifth and (ostensibly) final book in the multi-award-winning Joey Pigza chronicle features all of the drama, havoc, and heart readers have come to expect, dread, and love . . . The conclusion to Gantos' beloved and much-lauded series is big news, and Joey's fans of all ages will want to grab their copies as soon as possible.” —Booklist, STARRED REVIEW

“* Collectively, the Pigza series is a poignant examination of modern dysfunction, a window into how kids in tough family situations come to believe they are damaged and incapable of redemption.” —Publishers Weekly, STARRED REVIEW