A Peculiar Peril (The Misadventures of Jonathan Lambshead #1) (Hardcover) 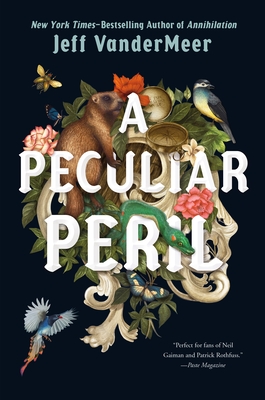 "In which three British teenagers are flung headfirst into a quest to save the known (and unknown) universes from annihilation if they can only keep their wits about them in this inexhaustibly madcap, wildly over the top, defiantly overlong story of inter-dimensional peril that throws every conceivable strand of spaghetti against the wall and somehow keeps you hungry for more"

A Peculiar Peril is a head-spinning epic about three friends on a quest to protect the world from a threat as unknowable as it is terrifying, from the Nebula Award–winning and New York Times bestselling author of Annihilation, Jeff VanderMeer.

Jonathan Lambshead stands to inherit his deceased grandfather’s overstuffed mansion—a veritable cabinet of curiosities—once he and two schoolmates catalog its contents. But the three soon discover that the house is filled with far more than just oddities: It holds clues linking to an alt-Earth called Aurora, where the notorious English occultist Aleister Crowley has stormed back to life on a magic-fueled rampage across a surreal, through-the-looking-glass version of Europe replete with talking animals (and vegetables).

Swept into encounters with allies more unpredictable than enemies, Jonathan pieces together his destiny as a member of a secret society devoted to keeping our world separate from Aurora. But as the ground shifts and allegiances change with every step, he and his friends sink ever deeper into a deadly pursuit of the profound evil that is also chasing after them.

A People Magazine Best Books to Read This Summer 2020

“Taking the peculiar darkness of Ransom Riggs’ Miss Peregrine series and the absurd humor and wit of Terry Pratchett, VanderMeer dreams up a wholly original tale, filled with complexity, imagination, and talking marmots. . . . A wild ride that requires a few leaps of faith from readers, but they’re in good hands with VanderMeer, who has a sequel in the works for those who emerge victorious from Aurora.” —Booklist, starred review

"A heck of a lot of fun. . . New readers young and old will find VanderMeer’s foray into fresh territory a welcome port of entry to a wildly imaginative universe" —The New York Times Book Review

"Even for an author known for creating some of the most memorable and important worlds in contemporary fiction, his newest journey into the alt-Earth known as Aurora is remarkable. . . A truly engrossing adventure." —The Chicago Review of Books