Somewhere Only We Know (Hardcover) 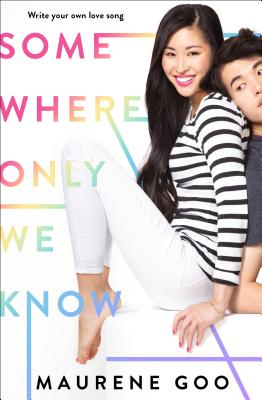 Sparks fly between a K-pop starlet and a tabloid reporter in Somewhere Only We Know, a heartwarming rom-com from Maurene Goo.

10:00 p.m.: Lucky is the biggest K-pop star on the scene, and she’s just performed her hit song “Heartbeat” in Hong Kong to thousands of adoring fans. She’s about to debut on The Tonight Show in America, hopefully a breakout performance for her career. But right now? She’s in her fancy hotel, trying to fall asleep but dying for a hamburger.

11:00 p.m.: Jack is sneaking into a fancy hotel, on assignment for his tabloid job that he keeps secret from his parents. On his way out of the hotel, he runs into a girl wearing slippers, a girl who is single-mindedly determined to find a hamburger. She looks kind of familiar. She’s very cute. He’s maybe curious.

With her trademark humor and voice, Maurene Goo delivers a sparkling story of taking a chance on love—and finding yourself along the way.

Maurene Goo grew up in a Los Angeles suburb surrounded by floral wallpaper, one thousand cousins, and piles of books. She studied communication at UC San Diego and then later received a Masters in publishing, writing, and literature at Emerson College. Before publishing her first book, Since You Asked, she worked in both textbook and art book publishing. She has very strong feelings about tacos and houseplants. She lives in Los Angeles with her husband and two cats.

“A quick-paced, entertaining plot, witty banter, and expert characterization make this a light and satisfying read, and a wealth of local details effortlessly immerse the reader in the worlds of Hong Kong and K-pop stardom. Charming and swoonworthy.” —Kirkus Reviews

“Lucky and Jack are both charming, funny narrators with serious chemistry. . .They share comfortable banter, smoldering looks, a few intense kisses—and in between, earnest existential conversations about pursuing their dreams and living meaningful lives. Readers, no matter their celebrity status, should relate.” —The Horn Book

"[Goo's] most charming to date. . .A delightful romp." —The New York Times


The Way You Make Me Feel:
"With massive amounts of humor, heart, and soul, this love letter to L.A. and its diversity is a celebration of friends, family, and food trucks." —Booklist, starred review

“The art-centric romance that develops between Desi and Luca is rewarding to follow, as are their parental relationships, particularly that between Desi and her widowed Appa. Goo simultaneously honors and deconstructs romantic tropes, both in general and specific to K dramas, and does so using a wonderfully diverse cast.” —Publishers Weekly, starred review