Duet: Our Journey in Song with the Northern Mockingbird (Hardcover) 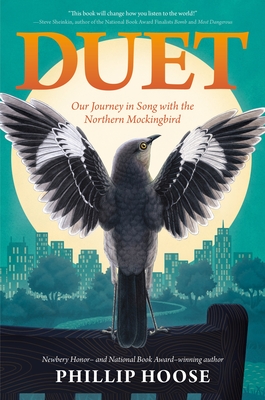 The story of the impactful partnership between humans and mockingbirds, both scientifically and culturally over the centuries, written for young adults by award-winning nonfiction powerhouse Phil Hoose.

The Northern mockingbird’s brilliant song—a loud, bright, liquid sampling of musical notes and phrases—has made it a beloved companion and the official bird of five states. Many of our favorite songs and poems feature mockingbirds.

Mockingbirds have been companions to humans for centuries. Many Native American myths and legends feature mockingbirds, often teaching humans to speak. Thomas Jefferson’s mockingbird, “Dick”, was the first White House pet. John James Audubon’s portrait of a rattlesnake raiding a mockingbird’s nest sparked outrage in the world of art. Atticus Finch’s somber warning to his children, “Remember, it’s a sin to kill a Mockingbird,” is known throughout the world. Some jazz musicians credit mockingbirds with teaching them a four-note call that says, “Break’s over.” And mockingjays—a hybrid between jabberjays and mockers—are a symbol of the rebel cause in the Hunger Games trilogy.

But in the early 1900s the mocker was plummeting toward extinction. Too many had been trapped, sold, and caged. Something had to be done. To the rescue came a powerful and determined group of women.

Now, National Book Award and Newbery honor-winner Phillip Hoose brings the story of the important and overlooked connection between humans and mockingbirds—past, present, and future. It is the third volume of his bird trilogy.

Duet is a study in the power of song. As author Steve Sheinkin puts it, “This book will change how you listen to the world.”

Phillip Hoose is an award-winning author of books, essays, stories, songs and articles. Although he first wrote for adults, he turned his attention to children and young adults in part to keep up with his own daughters. His book Claudette Colvin won a National Book Award and was dubbed a Publisher's Weekly Best Book of 2009. He is also the author of Hey, Little Ant, co-authored by his daughter, Hannah; It’s Our World, Too!; The Race to Save the Lord God Bird; The Boys Who Challenged Hitler; and We Were There, Too!, a National Book Award finalist. He has received a Jane Addams Children’s Book Award, a Christopher Award, a Boston Globe-Horn Book Award, and multiple Robert F. Sibert Honor Awards, among numerous honors. He was born in South Bend, Indiana, and grew up in the towns of South Bend, Angola, and Speedway, Indiana. He was educated at Indiana University and the Yale School of Forestry. He lives in Portland, Maine.

"A duet is a piece for two voices, and award-winning author Hoose ­provides a new perspective into an amazing bird and its place in American cultural ­history . . . A delight to read. ­Recommend for all libraries for a fresh look at the impact on ­native species of the settlement of America." —School Library Journal, starred review

"[W]ith breadth of scope and liveliness of prose . . . will likely leave readers with new appreciation for this common backyard bird." —Horn Book Magazine

“[Hoose] discusses the species' endangerment and efforts to save it as well as the mockingbird's current state, how it's adapting during climate change, and practices humans can make to support it. Related photos expand reader familiarity with this at once iconic yet lesser-known bird.” —Booklist

"Through loosely connected historical vignettes, Hoose capably paints a straightforward picture of the northern mockingbird, its species history, and its impact on the world." —Publishers Weekly

"Aspiring naturalists and bird watchers will easily zoom in on chapters that offer the deeper dives into bird research and will appreciate chapter-aligned source notes and an index." —The Bulletin of the Center for Children's Books

”Just as a mockingbird weaves snatches of melody from hundreds of sources to create its own flood of song, Phillip Hoose in Duet knits together science, history and folklore to tell the remarkably tangled story of humans and mockingbirds—how we loved this bird almost to death, brought it back from the brink just in time, and now get to share our backyards with one of the world’s greatest singers.” —Scott Weidensaul, author of A World on the Wing

“Hoose's passion for his subject comes singing through—this book will change how you listen to the world!” —Steve Sheinkin, National Book Award finalist author of Bomb and Most Dangerous

“Hoose writes a passionate ode to our shared history with the northern mockingbird.” —Rebecca E. F. Barone, author of Race to the Bottom of the Earth

“Hoose writes about the mockingbird with heart, intelligence, and enthusiasm. I learned so much! I was especially bowled over by the research in the last chapter—but I won't give it away!” —Deborah Heiligman, award-winning author of Charles and Emma: The Darwin's Leap of Faith

Praise for Moonbird:
“Only the truly hard of heart could resist cheering for B95.” —The Bulletin of the Center for Children's Books, starred review

“[An] effective mix of facts and conjecture . . . Vivid.” —The Washington Post

“Hoose’s stature as a preeminent nonfiction author combined with the high-interest animal hook will generate hearty attention and enthusiasm for this one.” —Booklist, starred review

Praise for The Race to Save the Lord God Bird:
“Outstanding in every way.” —Kirkus Reviews, starred review