The Testament of Cresseid and Seven Fables (Paperback) 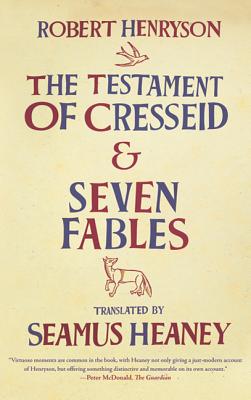 The greatest of the late medieval Scots makars, Robert Henryson was influenced by their vision of the frailty and pathos of human life, and by the inherited poetic example of Geoffrey Chaucer. Henryson's finest poem, and one of the rhetorical masterpieces of Scots literature, is the narrative Testament of Cresseid. Set in the aftermath of the Trojan War, the Testament completes the story of Chaucer's Troilus and Criseyde, offering a tragic account of its faithless heroine's rejection by her lover, Diomede, and of her subsequent decline into prostitution and leprosy. Written in Middle Scots, a distinctive northern version of English, the Testament has been translated by Seamus Heaney into a confident but faithful idiom that matches the original verse form and honors the poem's unique blend of detachment and compassion.

A master of high narrative, Henryson was also a comic master of the verse fable, and his burlesques of human weakness in the guise of animal wisdom are delicately pointed with irony. Seven of the Fables are here sparklingly translated by Heaney, their freshness rendered to the last claw and feather. Together, The Testament of Cresseid and Seven

Robert Henryson lived in Dunfermline, Scotland, sometime between 1400 and 1500. Counted among the Scots makars, he composed his highly inventive verse in Middle Scots. His surviving corpus amounts to fewer than five thousand lines.

Seamus Heaney (1939-2013) received the Nobel Prize in Literature in 1995. His poems, plays, translations, and essays include Opened Ground, Electric Light, Beowulf, The Spirit Level, District and Circle, and Finders Keepers. Robert Lowell praised Heaney as the "most important Irish poet since Yeats."

“The wintry force and appeal of [The Testament] are certainly apparent in [Heaney's] rendering . . . Read him and you'll want to experience the original, too.” —Sean O'Brien, The Sunday Times (London)

“[Heaney's translation of ] The Testament of Cresseid and Seven Fables is typically both masterful and accessible.” —Carol Ann Duffy, The Daily Telegraph

“[Heaney's] translation of The Testament into modern English . . . is a reminder that translation is one of the glories of the English literary tradition.” —Jonathan Bate, The Sunday Telegraph

“Virtuoso moments are common in the book, with Heaney not only giving a just-modern account of Henryson, but offering something distinctive and memorable on its own account.” —Peter McDonald, The Guardian