20 Under 40: Stories from The New Yorker (Paperback) 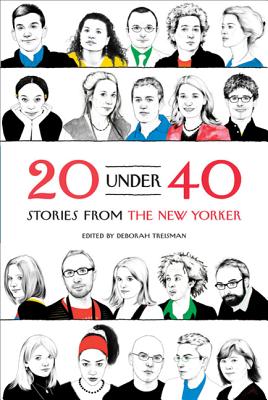 In June 2010, the editors of The New Yorker announced to widespread media coverage their selection of "20 Under 40"—the young fiction writers who are, or will be, central to their generation. The magazine published twenty stories by this stellar group of writers over the course of the summer. They are now collected for the first time in one volume.

Each of these writers reminds us why we read. And each is aiming for greatness: fighting to get and to hold our attention in a culture that is flooded with words, sounds, and pictures; fighting to surprise, to entertain, to teach, and to move not only us but generations of readers to come. A landmark collection, 20 Under 40 stands as a testament to the vitality of fiction today.

“The sweep of the storytellers included on this list is extraordinary . . . These 20 stories reassure us of the vitality of fiction today and are a testament to its necessity.” —Elizabeth Taylor, Chicago Tribune

“One volume, then, that hits it out of the park.” —Jeff Simon, The Buffalo News

“[T]his anthology is oddly uplifting and often transcends both charm and precociousness. If this is the future, the kids are all right.” —William J. Cobb, Dallas Morning News

“One can't predict how these writers will handle whatever fame and fortune come their way. But the talent on display - and what its editors refer to as the "clear sense of ambition" characterizing this volume's best selections - will spur any reader to reach back for what these writers already have done, while eagerly awaiting their work to come.” —Mike Fischer, Milwaukee Journal-Sentinel

“In 1999, the last time The New Yorker compiled a list of young writers destined to shake up the literary landscape, the names included Jonathan Franzen, Jhumpa Lahiri, Junot Diaz, Sherman Alexie, David Foster Wallace, Edwidge Danticat, Michael Chabon and George Saunders, all of whom subsequently made tremendous impressions on the world of arts and culture. There's no telling if the new crop of authors featured in 20 Under 40: Stories from The New Yorker will fare as well, but there's great promise in most of their stories gathered here . . . 20 Under 40 offers a unique perspective into the future of fiction.” —Connie Ogle, Miami Herald

“Of the 20 writers whose short fiction Treisman has gathered here, all are extremely accomplished, even gifted, and some already have a following of devoted readers.” —Alan Cheuse, NPR.org

“If anyone knows who's who in fiction, it's The New Yorker. So we're loving their new compilation of stories from their buzzy ‘20 Under 40'-- the young writers whose names will be on everyone's lips in the next few years, if they're not already.” —Marie Claire

“We seem to have entered a golden age of the short-story anthology, if the proliferation of annual and themed collections is any indication.” —Kirkus Reviews

“A terrific guide to good reading today. Get even if you subscribe to The New Yorker; great for reading groups, hungry literati, students, and naysayers who must be shown that fiction is not dead.” —Barbara Hoffert, Library Journal